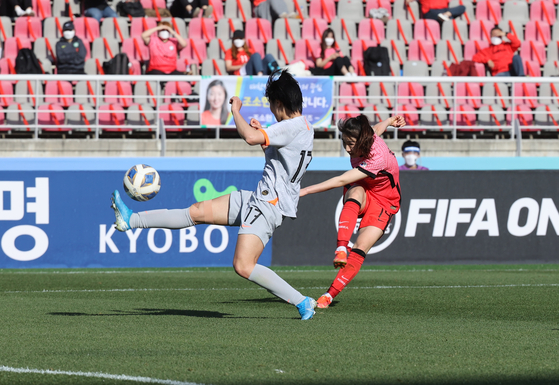 Korea's Kang Chae-rim scores the equalizer against China in the 39th minute in the first leg of a Tokyo Olympics qualifier at Goyang Stadium in Goyang, Gyeonggi on Thursday. [YONHAP]


Korea lost 2-1 to China in the hard-fought first leg of a Tokyo Olympic Games qualifier at Goyang Stadium in Goyang, Gyeonggi, on Thursday evening.

The Korean women's football team, led by Chelsea midfielder Ji So-yun, and the Chinese team were fairly evenly matched throughout the game, with a late penalty ultimately giving China the chance to pull ahead.

China, which sits three places ahead of Korea on the FIFA/Coca-Cola World Ranking, at No. 15 to Korea's No. 18, got on the scoreboard first, with a goal in the 33rd minute from Xin Zhang.

Ji picked up the ball in the 39th minute, deep in Korea's own half. A well-placed cross put the ball behind the China defense, where Kang Chae-rim came racing down the right wing to outpace the Chinese defender and pick up the ball on the edge of the box. Kang took three touches to beat the defense before hammering the ball across the goalmouth into the top left corner, well out of the reach of China's goalkeeper Shimeng Peng.

The first half ended with two sides level-pegging at 1-1. Korea opted to make one change coming into the second half, bringing on striker Son Hwa-yeon for Choo Hyo-Joo.

Both sides went on the offensive in the second half, attacking at either end but failing to make it past the defense. China's opportunity finally came in the 70th minute, when a mistimed tackle in the penalty box gave Wang Shuang a chance from the spot, taking the score to 2-1 China with 20 minutes left to play.

Korea continued hammering on the door for the rest of the game but weren't able to piece together that same magic that had put Kang in front of the goal 45 minutes earlier. Despite a number of plays inside the box, Korea weren't able to get a serious shot on goal in the dying minutes of the game and the whistle blew with China still up by one.

The Asian Football Confederation (AFC) qualifiers began in 2018 with a total of 25 teams entering the draw. After three rounds of qualifiers, only Australia, Vietnam, China and Korea are left competing for the two Olympic berths available to AFC countries.

Australia and Vietnam played their playoff last year, with Australia winning to earn a spot at the Games. The Korea-China game was delayed due to Covid-19, with the winning team earning the final spot at the Olympics.

Korea will head to Suzhou, China, for the second leg of the qualifier on April 13. Korea will need to finish a two-goal lead to win the match on aggregate and earn a chance to compete at Tokyo.