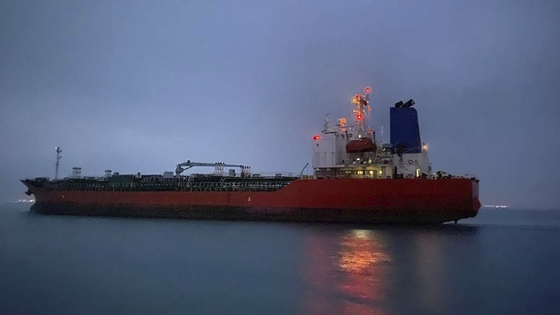 In this photo provided by South Korea's Foreign Ministry, The MT Hankuk Chemi leaves a port near Bandar Abbas, Iran, on Friday. [AP]

According to the Ministry of Foreign Affairs Friday, the MT Hankuk Chemi left a port near Bandar Abbas around 5:50 a.m. Iranian time, which was 10:20 a.m. Friday morning in Korea. Its captain and 13 other crew members were on board.

“The health conditions of the captain and crew are stable, and no abnormality about the ship or cargo was reported,” the ministry said. 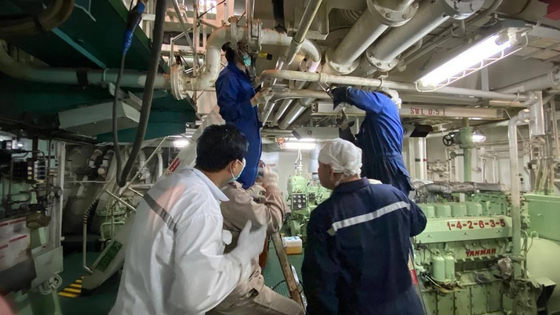 In this photo released by the Ministry of Foreign Affairs of Korea shows crew members of Korean oil tanker MT Hankuk Chemi preparing to depart Iran after the ship was released along with its captain on Friday. Iranian authorities had seized the ship near the Strait of Hormuz on 04 January 2021 alleging violations of pollution rules. [EPA]

The MT Hankuk Chemi, which was en route to the United Arab Emirates from Saudi Arabia with 20 crew, was seized by Iran's Islamic Revolutionary Guard Corps in the Persian Gulf on Jan. 4.

Iran blamed chemical and environmental pollution issues for the ship's seizure, accusations rejected by the operator of the vessel and the Korean government.

Many believed the seizure was Tehran’s way of pressuring Seoul to unlock assets worth some $7 billion held in the Industrial Bank of Korea and Woori Bank since September 2019, when U.S. sanction waivers for Korea's imports of Iranian oil expired.

Prime Minister Chung Sye-kyun was scheduled to visit Tehran in the near future to discuss Iran's assets frozen in Korea, and the release took place before his trip. Earlier this week, the Iranian government said it was “positively” reviewing the release of the seized ship and captain, indicating that Seoul and Tehran were nearing an arrangement.

No announcement was made from Seoul or Tehran Friday about the frozen assets.

When the ship was seized, it had 20 people on board including the captain. In February, Iran agreed to set free all the sailors except for the captain.

Not all sailors, however, could be released immediately because of the minimum crew needed to operate the tanker. Six were released and sent to Korea. The 14 released Friday included five Koreans including the captain, six Burmese, two Vietnamese and one Indonesian.

The ship will first sail to its original destination, the United Arab Emirates, and undergo an inspection.