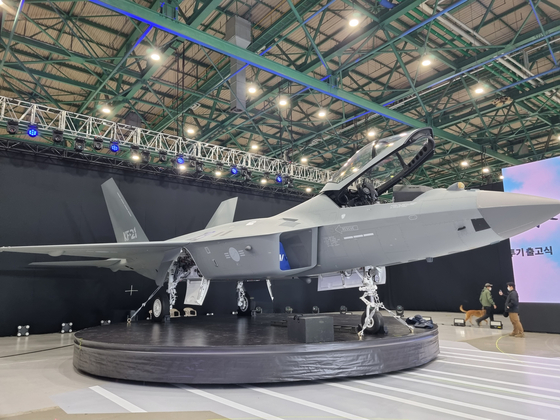 The prototype of the KF-21 Boramae, known until now as the Korea Fighter eXperimental (KF-X) project, was showcased during a rollout ceremony at the headquarters of KAI in Sacheon, South Gyeongsang. 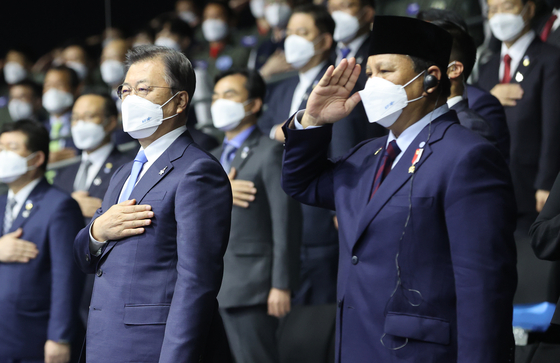 
Speaking at the event, President Moon Jae-in said Korea opened a new chapter in its aerospace technology history with the successful development of the twin-engine supersonic fighter jet.

"We now finally possess our own supersonic fighter jet, made by our own hands," Moon said. "We have opened a new era of self-defense and established a historic milestone for the development of the aviation industry."

Moon noted that should the KF-21 successfully complete its test flights, Korea would become only the eighth country in the world to develop a supersonic fighter jet.

Although the KF-X project initially focused on producing a fighter with higher capabilities than the KF-16 class fighter, the military shifted the focus to building a stealth fighter in the wake of North Korea's November 2010 shelling of Yeonpyeong Island that killed two marines and two civilians.

The incident highlighted the need for a more robust domestic air defense industry and changed the focus of the project from an upgraded fighter to a stealth fighter that could evade enemy air-radar systems.

Aimed at replacing the Air Force's dated McDonnell Douglas F-4 Phantom II and Northrop F-5 fighter jets, the KF-21 Boramae is a 4.5-generation aircraft, on par with the latest F-16 but less stealthy than the fifth-generation F-35 Lightning II developed by Lockheed Martin.

In his speech, Moon noted the practical advantages of production stability and domestic supply derived from the localization of such key technologies.

“We can build and put it into action whenever we need. Parts can be replaced and repaired at any time. The advanced avionics technology, including the AESA radar, can also be applied to upgrade existing fighters such as the KF-16 and F-15K.”

Over the past five years, disruptions or quality problems in the American-made parts supply led to 535 times when KF-16 fighter jets and 548 times when F-15K fighter jets could not be used by the Air Force. In contrast, the production localization of the KF-21 stands at 65 percent.

KAI plans to produce a total of six more fighter jet prototypes — four single-seat and two twin-seat models — by the first half of next year. Test flights for the prototypes begin next year, while development is due to be completed in 2026.

In addition to Moon, Indonesian Defense Minister Prabowo Subianto, KAI representatives and defense officials from Korea and Indonesia witnessed the rollout of the prototype.

The development of the KF-21 has been called the most expensive military project in Korean history, with a price tag of approximately 8.5 trillion won ($7.8 million) for development alone. Approximately 1.6 trillion won, or 20 percent, is to be paid by Indonesia, which will eventually receive 50 out of a total 170 jets.

Korean Defense Acquisition Program Administration records submitted to the National Assembly in February showed Indonesia has only paid 227.2 billion won in three early installments out of the 831.6 billion won it promised for the development thus far.

Despite the Southeast Asian country sending a delegation to the official rollout of the KF-21, there is no official indication Korea and Indonesia have resolved their cost-sharing issue.

While Prabowo and Defense Minister Suh Wook on Thursday agreed on continued mutual cooperation in defense ties, official statements did not mention the overdue payment. Prabowo also met with Moon later on Thursday, but the payment issue remained unmentioned in official announcements after the meetings.