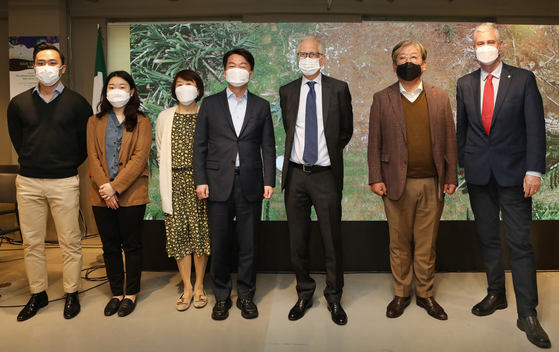 Climate action should be an agenda for the young people of Korea, said participants of a panel discussion hosted by the Italian Embassy of Korea and the Global Green Growth Institute (GGGI) in Seoul on Thursday.


“We want to be a leader in this sector,” said Park Ji-won, a participant on the panel discussion at High Street Italia in southern Seoul, following the screening of a documentary on climate change, “The Climate Limbo” by Elena Brunello, which highlights migration resulting from climate change.


The documentary screening was hosted in the lead up to a youth forum as part of the 26th United Nations Climate Change Conference of the Parties (COP 26), which will be hosted by Britain in partnership with Italy, in Glasgow in November.

“The ‘Youth4Climate Change: Driving Ambition’ event and the pre-COP will be held [from Sept. 28 to Oct. 2] back to back in order to allow young people to meet with ministerial delegations and present their decisions and proposals,” the Italian Embassy in Korea said in its statement Thursday. “Italy deems it crucial to promote the engagement of the young generations in our decision-making processes, because what we do now will have an impact on their lives mainly.”

The participants to the forum hosted in Seoul by the embassy and GGGI included young adults in the city, experts on climate change and green growth, as well as some politicians including minor opposition People’s Party’s leader Ahn Cheol-soo.

“Climate change is an important agenda for the society, but a lot of the elected officials in Korea have short terms in office, four years for the lawmakers and five years for the president, and I think that may be part of the reason why climate action is not one of the prioritized agendas of politicians in Korea, as politicians tend to focus on solutions that have more immediate results,” Ahn said in response to a question from a panelist at the forum about why climate action is not considered a top agenda by many politicians in Korea.

Climate and renewable energy experts attending the forum highlighted how fast the governments around the world responded to the Covid-19 pandemic and that the same potential is there when it comes to climate action.

“The Korean government, with civic society, has managed the Covid crisis quite well,” said Frank Rijsberman, director-general of the GGGI. “I have been impressed at how quickly the government was able to mobilize [around] 30 trillion won [$26 billion] to fight Covid [...] The recovery plan included the Green New Deal as well and the government committed to reaching net zero last year, these are important steps.”

Korea’s updated Nationally Determined Contributions (NDCs) include reducing its total greenhouse gas emissions by 24.4 percent of the level in 2017, which was 709.1 million metric tons of carbon dioxide equivalents, by 2030. It said that it will make another update on the target before 2025, to ensure that the country reaches carbon neutrality by 2050.

NDCs are national goals put forward by each party aimed at drastically lowering greenhouse gas emissions to limit global warming to below two degrees Celsius (3.6 degrees Fahrenheit) compared to pre-industrial levels, as per the Paris Agreement.

Korea will also be hosting Partnering for Green Growth and the Global Goals (P4G) summit virtually in May.

“Sharma came to Korea for the second time in six months, and it’s because Korea is an important country for the COP,” Rijsberman said. “We hope that Korea will provide guidance to other countries in this field.”

A number of events will follow on the topic of Korea-Italy cooperation on climate change, according to the Italian Embassy in Seoul.

“We hope that there will be strong participation from the Korean side on the Youth4Climate forum and Pre-COP,” said Italian Ambassador to Korea Federico Failla. “Today’s discussions will be one of many that will follow in the next few weeks, which you can also follow on our social media accounts.”