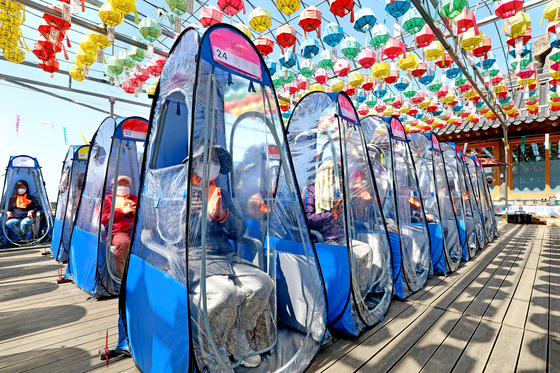 Buddhists at Daegyun Temple in Daegu pray in private tents designed to prevent the spread of Covid-19 on Sunday. [NEWS 1]


Health authorities will resume AstraZeneca vaccinations from Monday except for people under 30, after temporarily suspending the jabs due to a possible link with blood clots.

Korea's Covid-19 vaccination task force announced on Sunday that it will roll out the temporarily suspended vaccination program for the second quarter as planned. Special education instructors, school nurses and workers at high-risk facilities, as well as people under 60, will be eligible for the vaccinations.

The government did not halt the jabs for those over 60.

The task force announced such plan after discussions with experts and the vaccination committee.

The vaccination committee advised "AstraZeneca vaccinations to be resumed as soon as possible" because "it is more important than anything else to reduce the number of deaths and the size of the pandemic amid the continued risk of Covid-19 in the country," and cited the European Medicines Agency (EMA)'s statement that the benefits of the vaccine still outweigh the risks of side effects.

However, health authorities decided that those under 30 will not be administered AstraZeneca vaccines because the risk of suffering blood clots for those in that age bracket is greater than being hospitalized or dying from Covid-19.

"The rare blood clots are more commonly observed in younger people, while the risk of serious diseases and deaths from Covid-19 increases significantly with age," said Choi Eun-wha, the head of the vaccination committee.

"Therefore, we decided not to recommend [AstraZeneca] vaccines for those under the age of 30 who are considered low-risk," said Choi. British health authorities have also recommended that those under 30 receive vaccines other than AstraZeneca.

The government is still trying to find an alternative vaccine for the 640-thousand people under 30 who were to get their AstraZeneca jabs in the second quarter.

"We have to supplement the inoculation plan depending on the supplies and delivery schedule of the vaccines," said Jeong Eun-kyeong, commissioner of the Korea Disease Control and Prevention Agency (KDCA).

"We are currently negotiating the delivery date of Janssen and Novavax vaccines, as well as with Pfizer to receive them earlier, so after new supplies are confirmed we will decide [the new plan] based on who is a priority."

However, there are concerns over the country's goal to achieve herd immunity by November, due to the unstable vaccine supply around the globe while the number of Janssen, Novavax and Moderna vaccines set to be delivered to Korea remains unclear.

Previously, Korea reported three cases of people developing blood clots after receiving the AstraZeneca shots, including a woman in her 60s who later died, and two people in their 20s.

The KDCA and the vaccination committee, however, concluded that neither the death nor the blood clots were caused by side effects from the AstraZeneca vaccine.

Most of the blood clot cases reported in Europe were found to be a rare type of blood clot accompanied by low platelet count and internal bleeding.

"While one of the cases [of the three people who developed blood clots in Korea] was linked with the AstraZeneca vaccine, it cannot be considered a side effect as defined by the EMA, as there was no decrease in platelets," said Jeong.

Those who received the first shot of the AstraZeneca vaccine and showed no side effects will receive their second shots as scheduled.

The KDCA will also establish a monitoring system that allows early detection and treatment of blood clots.

A total of 1,156,950 people have been vaccinated as of Saturday midnight, including 8,710 the previous day.

The AstraZeneca vaccine has been administered to 916,870 people, while 300,680 received the vaccine from Pfizer. The number of people who have received the two doses of the vaccine came to 60,510.

The number of daily cases has remained in the 600s for three consecutive days, although fewer tests are conducted on weekends.

"Only 13 percent of patients who tested positive in November last year were unable to trace how they contracted the virus, compared to more than a quarter of the total confirmed cases recently," said Health Minister Kwon Deok-cheol during a government Covid-19 response meeting.

"The increase in the number of patients with unknown transmission routes is a dangerous signal that the virus is spreading faster than our epidemiological investigation. It indicates that there are numerous hidden spreaders throughout the community." 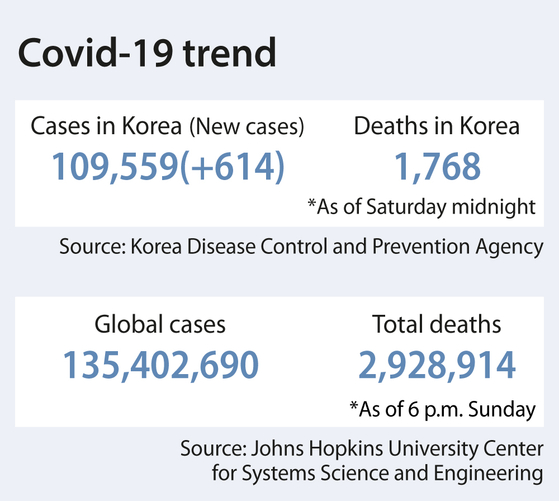 As a result, the government extended the current social distancing levels for another three weeks — Level 2 for the greater Seoul area, Busan and Daejeon, and Level 1.5 for other regions — until May 2. Level 2 is the third highest of the country's five-tiered distancing guidelines, followed by Level 1.5.

In addition to the current measures, hostess bars, "room salons" and nightclubs in the capital region and Busan will be barred from operation starting Monday.

Amid looming concerns over the fourth wave of the pandemic, President Moon Jae-in will hold an emergency meeting on Monday with related officials, including the health minister and head of the KDCA.