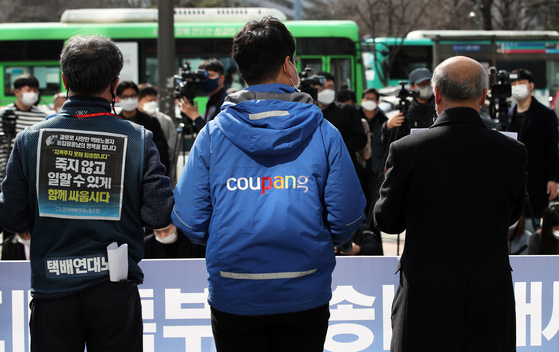 A committee dedicated to preventing deaths of deliverymen from overwork demands Coupang come up with countermeasures to prevent similar incidents at a press event held in front of the e-commerce operator’s headquarters in Songpa District, southern Seoul, on March 8. [NEWS1]


In the month since Coupang listed in the United States, the stock has traded poorly leaving retail investors with losses and some with a sense of desperation about what was sold to them as an easy win.

More than $10 billion was wiped off the company's market capitalization since the first day, dropping from $88.65 billion to $78.64 billion as of Friday.

It is still larger than Naver, which is No.3 in Korea by market capitalization after Samsung Electronics and SK hynix.

Korean retail investors have been hard hit in the fall. They purchased a net $91.28 million worth of Coupang shares since it went public, according to data from the Korea Securities Depository.

Retail investors are not at all happy about the situation and have been venting online.

"I invested a considerable amount of money in Coupang shares on the first trading day as everyone at the time said the price would increase further," said Lee Moon-sook, a 48-year-old office worker. "But it has been showing a downward trend recently, and I've lost the chance to sell."

"I'm so concerned that the share price will decline fast as the U.S. stocks do not have volatility limits," Lee added. "I wish to sell all off, but I don't know when is the right time."

Stocks in Korea are generally limited to daily price swings of 30 percent.

Some analysts believes that Coupang, which has never made a profit, is overpriced. For Coupang, the price-to-sales ratio (PSR) is at somewhere between 3.6 and 4 times, higher than Amazon's 3.3 times.

"The PSR ratio of Emart, one of Korea's giant retailers, has never been 4 times before," said Seo Jung-yeon, an analyst at Shinyoung Securities.

Park Jong-dae, an analyst of Hana Financial Investment, agrees with Seo, especially given the aggressive deals being offered by the company as it tries to gain market share against sizable and well-established domestic competition.

"The prices of stocks from companies with high valuations easily drop when there is some negative news," Park said. "Coupang has been offering customers free returns of their products, and people are raising doubts over Coupang if it could really become profitable in the future."

Employees are allowed to sell their shares, and this has also been affecting the share price unfavorably.

Coupang's lockup regulations do not allow large shareholders or employees to sell their stock for 180 days after the IPO. But a clause enables employees to sell after six trading days if the stock closes at the same as its offering price or near it on the third day of trading.

The requirement was fulfilled on March 15 as the stock closed at $50.45 and employees were able to unload some 34 million shares worth around $1.7 billion, accounting for 4.8 percent of the company's total shares outstanding, starting from March 18.

"As the price closed near $50-mark a share at the end of last month, big retail investors might have sold off their shares to make profit," said a source from a local brokerage house.

Large global investment banks have mixed opinions on the future of Coupang shares.

Goldman Sachs, which was lead underwriter of the IPO, has initiated coverage on Coupang with a Buy rating and a $62 price target. The investment bank forecast that the market share of Coupang in the domestic e-commerce market is expected to grow to 28 percent by 2023 and 47 percent by 2030.

In 2020, Coupang had 13 percent of the e-commerce market in Korea, after Naver, which had 17 percent.