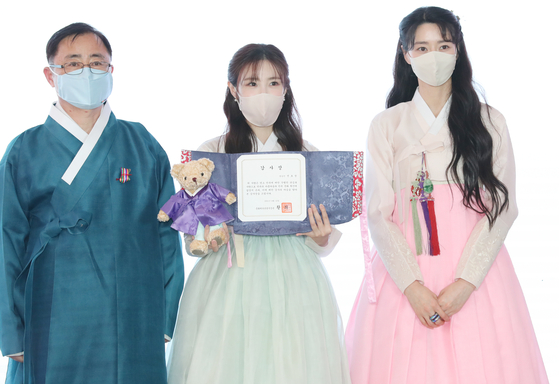 
Singer and actor Jun Hyo-seong, center, poses dressed in hanbok, traditional Korean clothing, on Monday after receiving a letter of appreciation from Vice Minister of Culture, Sports and Tourism Oh Yeong-woo, left, at Seoul Dongdaemun Design Plaza. Jun was honored for her participation in the promotion of hanbok with local fashion brand Lakai Korea, which ran a large-screen ad of Jeon wearing hanbok in New York’s Time Square to commemorate the March 1st Independence Movement Day. The letter was given to those who participated in promoting hanbok as part of Hanbok Culture Week that runs until April 18.