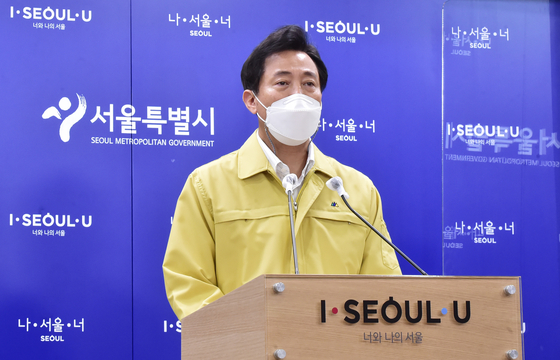 Seoul Mayor Oh Se-hoon announces a plan to have customers of noraebang (singing rooms) and other entertainment facilities tested at the door with over-the-counter Covid-19 test kits in a press briefing Monday at City Hall. [YONHAP]

Newly elected Mayor Oh Se-hoon wants Seoul back in business, and one of his proposals is to use over-the-counter Covid-19 test kits at the doors of noraebang (singing rooms) and bars.

“According to an association of self-employed businesses in the city, around 32.3 percent of them are thinking of closing down if the current state of social distancing continues,” Oh said in a press briefing Monday. “It is time to try different measures to help business owners while keeping the basic prevention measures.”

Different levels of social distancing measures have been in place since March 2020, and bars, clubs, noraebang and other nightspots have either been shut down or restricted in their hours and capacity.

Under current Level-2 social distancing measures in place in Seoul through May 2, bars that involve dancing and night clubs are not allowed to operate at all. Noraebang, gyms, saunas, restaurants and cafes and theaters must close at 10 p.m., whilst maintaining distances of at least 2 meters (6.5 feet) among customers.

Oh is trying to find ways to allow these businesses to operate longer and entertain more customers. His proposed solution is the over-the-counter Covid test kits.

“If we can stop the virus at the door with the use of these over-the-counter test kits, these businesses will be able to run longer hours and return to business as usual,” Oh said.

The problem is that over-the-counter test kits have not been approved for use domestically by the Ministry of Food and Drug Safety. All tests in Korea are conducted at public health care centers, hospitals, or specific test centers run by health authorities.

“The city government this morning asked the Ministry of Food and Drug Safety to consider approving over-the-counter test kits,” Oh said. “For the remainder of this week, we will be drafting a protocol of how exactly we intend to test people at the door and have businesses normalize their operations.”

Oh added that the protocol will be discussed with the central government next week to get its approval.

The Ministry of Health and Welfare announced in a press briefing earlier in the month that the government is considering approving over-the-counter test kits.

“We are asking the opinions of many experts about the efficacy of such over-the-counter test kits,” Kwon Jun-wook, deputy director of the Central Disease Control Headquarters, which is run by the Health Ministry, told the press on April 1. “No over-the-counter kits have been approved for use in Korea, but there are some Korean companies who are producing these kits for use abroad.” 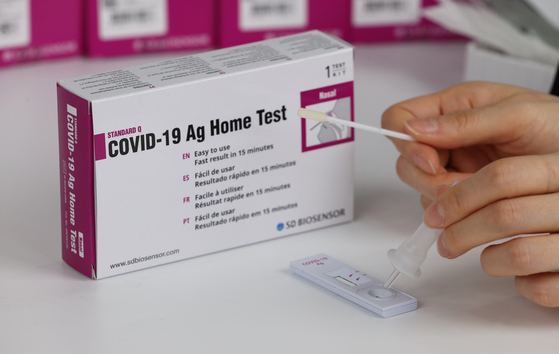 SD Biosensor's over-the-counter test kit allows a user to run a self test, by a swab of their nose. [YONHAP]


Such kits were approved for use by the U.S. Food and Drug Administration last December. The first approved in the United States is the Ellume Covid-19 Home Test, a type of rapid antigen test that allows people to use a swab of their nose to find results in some 20 minutes.

But some are concerned about the accuracy of the tests.

“There have been studies on rapid tests that point to lower rates of accuracy amongst them,” Kim Woo-joo, a doctor in the infectious disease department at Korea University Guro Hospital, told the JoongAng Ilbo. “You might as well flip a coin to determine if you’re infected or not – that’s how low some of their accuracy rates are.”

For the owners of some of the nightspots in the city, however, the mayor’s proposal is a light at the end of a very long tunnel.

“At this point, we are grateful that the mayor is taking notice and trying to find a solution,” Ha Pil-soo, president of an association of noraebang owners in Seoul, told the JoongAng Ilbo. “If all goes well, we may be able to operate longer hours and still keep the infection at bay.”