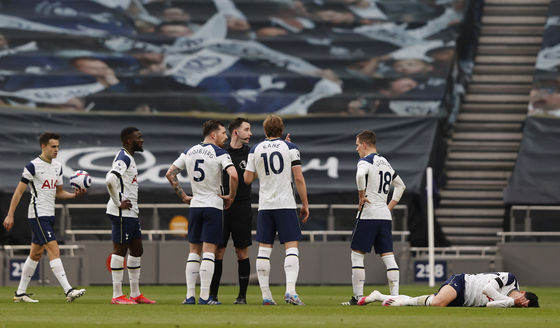 Tottenham Hotspur's Harry Kane and teammates remonstrate with referee Chris Kavanagh as Son Heung-min reacts after a foul in the 33rd minute in a game against Manchester United at Tottenham Hotspur Stadium in London on Sunday. [REUTERS/YONHAP]


Tottenham Hotspur striker Son Heung-min scored his first goal since early February, finding the back of the net in the 40th minute to give Spurs an early lead in what would go on to be a 3-1 loss to Manchester United at Tottenham Hotspur Stadium in London.

But despite breaking the deadlock and picking up his first Premier League goal since Feb. 7, Son's lasting memory of the game is likely to be the strongly-worded rebuke he received from United manager Ole Gunnar Solskjær, pundits and some fans for what they considered to be a dive that robbed Manchester of its first goal.

In his first return to the starting XI since a hamstring injury last month, Son slotted back into a Spurs offense that continued the lacklustre performance that has held it back over the past few months. One notable exception came in the 40th minute, when Harry Kane, Lucas Moura and Son played around each other perfectly, putting the Korean in front of the net to roll in Tottenham's only goal of the game. 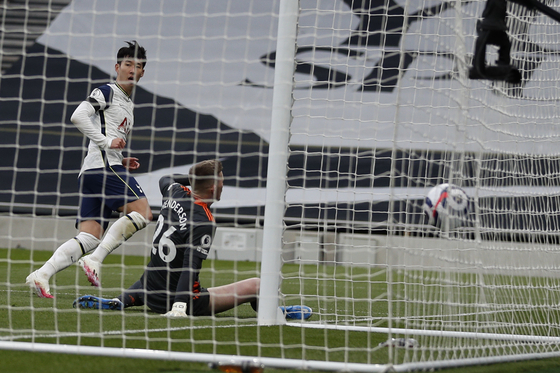 
That goal was always going to be overshadowed by what happened seven minutes earlier, however.

In the 33rd minute, Edinson Cavani scored what appeared to be the opener for United, slotting the ball past Hugo Lloris in the box to find the back of the net. The goal was initially allowed, but then canceled after the referee checked VAR.

The reason the goal was canceled was a foul on Son 10 seconds earlier in the build up to the goal. Manchester's Scott McTominay's hand made contact with Son's face and the Korean forward went down, staying down until after the goal was scored. The contact was ruled a foul and the goal disallowed.

The reaction from United fans and officials to what they considered diving was fast and vicious.

"I have to say if my son stays down like this for three minutes and he gets 10 of his mates around him if he gets that in the face from one of his other mates, and he needs 10 mates to help him up, he won’t get any food,” Solskjær said of Son in what appears to be a crude reference to the similarity between the Korean star's name and the English word "son."

Solskjær wasn't the only one to rally against Son. Former Manchester player and pundit Roy Keane also called out the foul and Son's reaction to it.

"I’m amazed, really, I have to say. If that’s a foul, we should all go home, it’s really bizarre," Keane said on Sky Sports. "For a player like Son, to roll around like that, it’s embarrassing. Cavani’s movement is fantastic. That cannot be a foul."

Manchester went on to score three goals in the second half to end the game at 3-1, essentially rendering the issue of Cavani's goal moot anyway as Spurs still ended up walking away with a loss.

Son was also the victim of racial abuse after the game, with Spurs releasing an official statement condemning the racism. 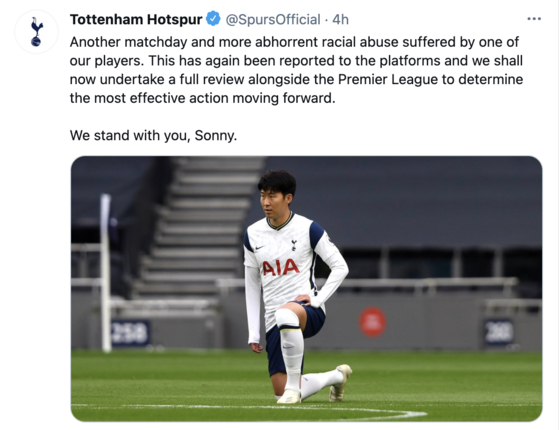 
"Another matchday and more abhorrent racial abuse suffered by one of our players," the club said in a statement on Twitter. "This has again been reported to the platforms and we shall now undertake a full review alongside the Premier League to determine the most effective action moving forward. We stand with you, Sonny."

Although the club didn't mention Solskjær's remarks, online commenters were quick to call out the Manchester manager for encouraging racism toward Son by mocking the Korean player's name.

Mourinho also jumped to Son's defense, although he did so by continuing the same misguided metaphor.

"In relation to Sonny," Mourinho said, "I just want to say that Sonny is very lucky that his father is a better person than Ole."

Appearing in a press conference visibly shaken up after the game, Son did not discuss the foul or the disallowed goal. He told reporters he was upset by the result and the team's performance, and promised to "do his best" throughout the eight games that remain this season.