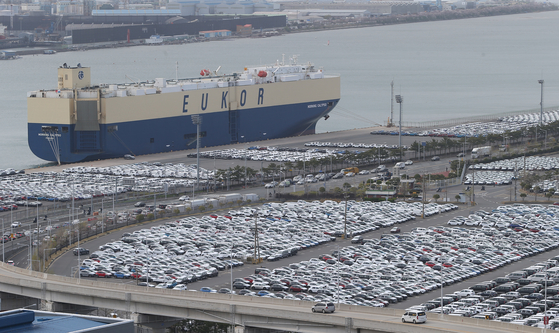 Vehicles sit ready for loading in Ulsan in March. [YONHAP]


Korea's automotive industry is roaring back as production and domestic and overseas sales all grew year-on-year in the first three months of 2021.

This is the first time in seven years in which all three figures have increased.

The sale of environment-friendly vehicles rose sharply, especially with the rollout of new electric vehicles from Hyundai Motor and Kia.

According to the Ministry of Trade, Industry and Energy on Tuesday, local automotive production rose 12.2 percent in the first quarter on-year as sales were strong at home and abroad.

Other than China, Korea was the only country in which production grew in the first two months of the year.

Domestic sales were helped along by the government's extension of an individual consumption tax cut for newly purchased cars.

The tax cut was supposed to end at the end of 2020, but the 30 percent cut was extended for another six months.

"As the automotive companies have been releasing a variety of new models as well as the government's lowered individual consumption taxes, production and domestic and overseas sales increased," said Lee Min-woo, an official from the Automobile and Aerospace Division of the Ministry of Trade, Industry and Energy.

Korea and China were the only countries in which growth was double-digit.

In the first two months of the year, Korea's domestic vehicle sales were up 21.9 percent. China's surged 77 percent.

Export's were led by SUVs and EVs.

By value, Korea's auto exports grew 31.5 percent year-on-year to $11.9 billion.
The biggest contributor was environment-friendly vehicles including EVs. In the domestic market, sales of these vehicles grew 90.5 percent in the first three months of this year to 68,546 units.

That was the second largest quarterly sales of these vehicles since 75,000 units were sold in the final quarter of 2020. Environment-friendly vehicles accounted for nearly 16 percent of all new vehicle sales in the first quarter, which is a record.

A total of 5,887 foreign brand environment-friendly vehicles were sold, which is a 148 percent year-on-year increase. Hybrid sales increased by 294 percent, while plug-in hybrid sales rose 424.6 percent.