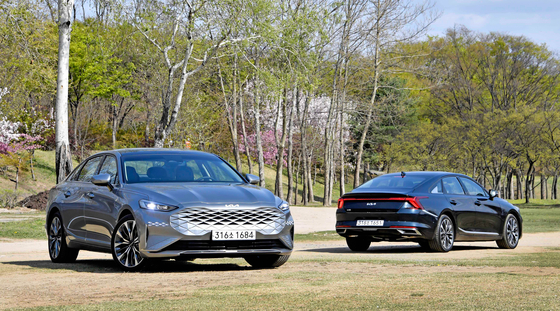 Kia’s K8 is a beautifully crafted car that has all the looks of a luxury sedan, minus the solid performance and soundproofing.


The midsize K8 sedan replaces the K7, known as the Cadenza in the global market. It launched in Korea this month and is already making a splash, garnering 24,000 reservations in just 12 days during its preorder period. 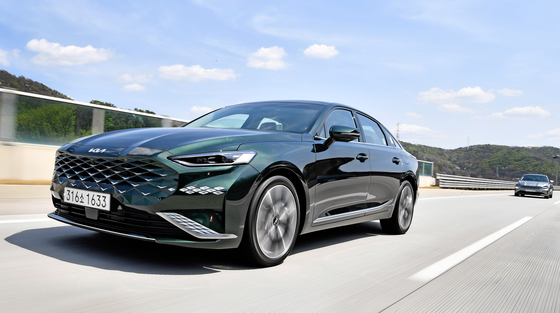 
The Korea JoongAng Daily got behind the wheel of the K8 equipped with a 3.5-liter petrol engine to drive an 80-kilometer (50-mile) route to Namyangju, Gyeonggi.

As the first model to launch after Kia rebranded itself with a new company name and logo, the K8 should hint at how Kia wants to position its lineup in the global auto market.

Approaching the K8, the most noticeable thing is its completely overhauled design.

As well as featuring the new Kia logo, the frameless diamond grille on the front gives the vehicle a sophisticated and luxurious look, something not often spotted on Kia cars in the past. Just as smartphones once went crazy about a “bezel-less design,” the frameless grille definitely boosts the car’s futuristic demeanor.

The diamond shape motif crops up in every nook and cranny of the vehicle: On the leather of the seats, on the inside of the doors, on the dashboard, on the speakers, on the air conditioner ventilation and more.

Press the unlock button on the key and the turn signal — made up of, you've guessed it, diamonds — twinkles sporadically, welcoming the driver. Not a crucial function for a car, but definitely something that could amuse and please the owner.


From the side, the K8 resembles a coupe due to its sloping roofline, hinting that Kia has chosen to inherit the sportier look and younger identity that has set it apart from its bigger affiliate Hyundai Motor. 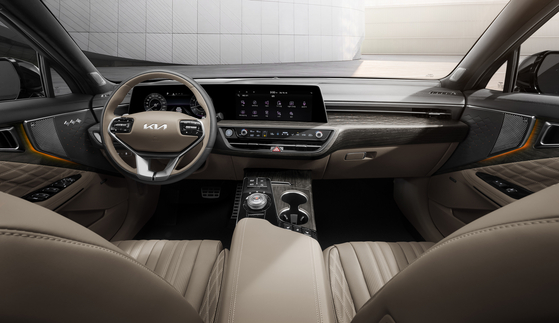 The interior of the Kia K8 [KIA]


Once inside, the 24.6-inch gigantic curved display at the center immediately grabs the attention, with the 12.3-inch digital cluster screen behind the steering wheel and 12.3-inch infotainment screen in the center integrated into a single screen.

Most of the infotainment functions including navigation are accessible through buttons on the screen. The air conditioner and heater functions, however, have been placed separately underneath the screen for more convenient and intuitive control.

But while the K8 is a high-tech beauty when it comes to design, Kia doesn't seem to have done much to revolutionize the driving experience.

Driving below 130 kilometer per hour (81 miles per hour) was as smooth and quiet as it could get, but going faster than that had noise from the wind and from the road clearly audible inside the cabin.

The vehicle comes equipped with a premium British Meridian speaker but its high-quality sounds couldn’t shine due to all sorts of noises coming from outside.

Acceleration wasn’t as responsive as expected under the car’s “Eco” driving mode, but this could be supplemented by driving under the “Sports” mode, which instantly upgraded the driving feeling with more engine growling sounds and powerful performance.

Even after overstraining the car, its fuel efficiency was fairly nice, standing at 12.3 kilometer per liter (29 miles per gallon) after the test drive was completed.

The 3.5-liter petrol version gives a maximum horsepower of 300 and torque of 36.6 kilogram-meter.

The K8 is a direct rival to Hyundai Motor’s Grandeur sedan, a longtime bestselling model not only for Hyundai Motor but in the entire midsize sedan segment in the country.

For those who want something a little different — and aren't too bothered about high-end performance or a little noise — the K8 could be the car to go for. 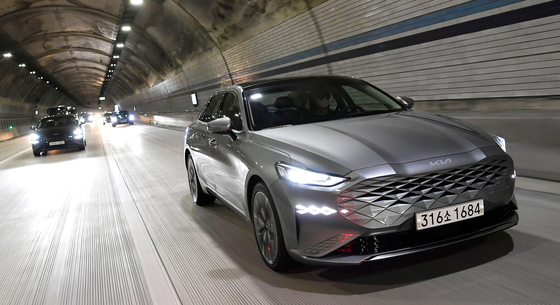 Hyundai Motor, Kia and Stellantis vehicles are being recalled