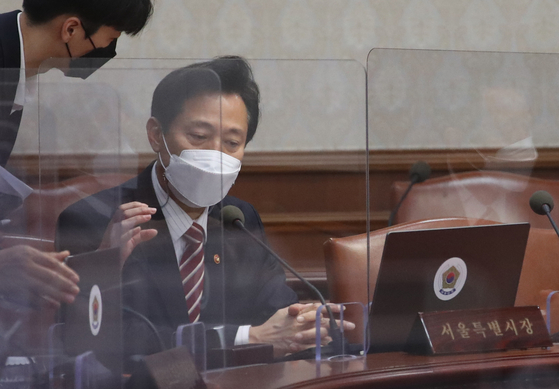 
Seoul Mayor Oh Se-hoon and ministers of the Moon Jae-in administration engaged Tuesday in heated debates over the Covid-19 response measures and real estate policy at the weekly cabinet meeting.

Moon hosted the cabinet meeting in the morning, and Oh of the main opposition People Power Party (PPP), elected as Seoul's new mayor last week, attended the session. While Seoul mayor is not a formal member of the cabinet, it is customary for the mayor of the capital city to attend the meeting.

President Moon Jae-in, right, exchanges greetings with Seoul Mayor Oh Se-hoon, shown left in the screen hung on the wall, during the video conference cabinet meeting on Tuesday. Moon joined the meeting from the Blue House, while Oh and some other ministers joined from the government complex buildings in Seoul and Sejong. [YONHAP]


At the meeting, Oh again pitched his idea of using Covid-19 rapid antigen self-test kits to normalize operation of schools, religious facilities and businesses in Seoul. "To this end, it is necessary for the Ministry of Food and Drug Safety to approve the use of rapid self-test kits," Oh said. “I hope the president will pay special attention to my proposal.”

In Korea, all tests are conducted at public health care centers, hospitals or government-run test centers.

Oh had previously announced Monday that he wants the government to allow the use of over-the-counter test kits to normalize the lives of Seoulites. While the mayor initially promoted test kits by saying they will boost the economy by allowing extended operation of businesses such as bars, clubs, noraebang (singing rooms), gyms, saunas, restaurants and cafes, he put more emphasis on normalizing attendance at schools and religious facilities when he pitched the idea on Tuesday.

Minister of Health and Welfare Kwon Deok-cheol was unconvinced by Oh’s idea. He said the self-test kits are unreliable, and it should only be used as a supplementary means.

Minister of Food and Drug Safety Kim Gang-lip, however, said the accuracy of the self-test kits was 90 percent when diagnosing infected patients. “We will work faster for the approval process,” Kim said.

Minister of Interior and Safety Jeon Hae-cheol, a key associate of Moon and the deputy head of the Central Disaster and Safety Countermeasure Headquarters, concluded the debate by saying any local government ideas must be discussed with the headquarters. “If we don’t review it, it can create chaos in disease prevention efforts,” he said.

Oh also proposed the government change its system deciding the assessed value of apartments nationwide, noting that the assessed values are used as legal grounds to decide the amounts of various property taxes, national health insurance premiums and other welfare benefits. Expressing concerns that a rapid hike of assessed home values will increase the people’s burdens, Oh requested relevant laws and the government system be changed.

“The Ministry of Land, Infrastructure and Transport exclusively decides the assessed values of apartments,” Oh said. “Local autonomous governments should be allowed to participate in the decision-making process.”

Earlier this year, the ministry raised the average assessed value of apartments nationwide by 19.08 percent for 2021 — a major surge compared to the 5.99 percent increase last year. It was the sharpest increase in 14 years. That figure is used as a base for taxes on properties including the comprehensive real estate tax.

In Seoul, the assessed value of apartments rose 19.91 percent on average, compared to last year's rise of 14.75 percent. It was the sharpest hike since the 28.4 percent hike in 2007.

Deputy Economic Prime Minister and Finance Minister Hong Nam-ki countered Oh’s idea. “Some local governments had complained that the assessed values of apartments were wrongfully decided, but it was decided by a survey of the Korea Real Estate Board,” Hong said. “There is no room for the government to make an arbitrary adjustment.”

At the end of the cabinet meeting, Moon said the Seoul Metropolitan Government and ministries need to communicate more to resolve the problems.

“Whether a matter of social distancing or the real estate issue, the city of Seoul comprises the largest portion,” Moon told Oh. “A nationwide resolution is possible only after the problem in Seoul is resolved, so the ministries and the city government must communicate and work together.”

At the beginning of the cabinet meeting, Moon made clear that he will push forward his policies even after the ruling Democratic Party (DP)’s crushing defeats in last week’s by-elections.

“We must remain unshaken and show an attitude of taking indefinite responsibility to the people,” Moon told his ministers. “Each ministry must do its best to complete their missions.”

Moon also said his top priority is creating jobs for the young.

Following the cabinet meeting, Oh held a press session at the Seoul Metropolitan Government and said, “It was a very smooth discussion."

After his opening remarks, Moon congratulated Oh on his victory. He is the first opposition politician to attend the cabinet meeting after Moon took office in May 2017.