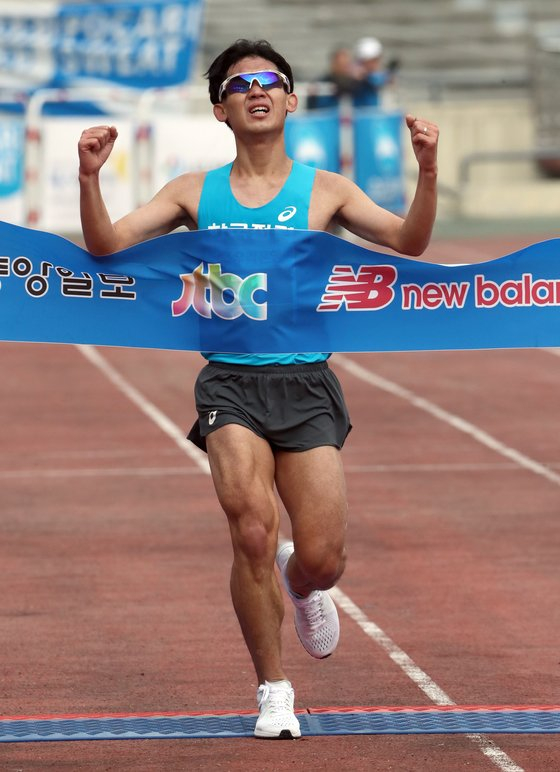 
Marathon runner Shim Jung-sub has earned his spot at the Tokyo Olympics.

Tokyo will be Shim’s second shot at the Olympics, having ran at the 2016 Rio Olympics.

Each country is permitted to enter a maximum of six athletes in the marathon events — three men and three women — but all athletes have to qualify, either based on their world ranking or on beating the Olympic cutoff times.

Before Shim, Kenyan-born Korean Oh Joo-han was the only male long distance runner to earn a spot at the Tokyo Games. Oh qualified in 2019 at the Gyeongju International Marathon with a record of two hours eight minutes and 42 seconds.

Preparing for the Tokyo Olympics was especially difficult as a series of qualification events were canceled due to the pandemic, meaning Shim was unable to compete in any official qualification races from March 3, 2019.

The decreasing number of qualification opportunities has been critical for long distance runners, as it takes months for them to prepare for one race.

With the Olympics scheduled for this Summer, the race at Yecheon was Shim’s last chance to qualify.

Against all odds, Shim was able to shorten his personal best of two hours 12 minutes 57 seconds by a minute and 33 seconds.

“I am very happy," Shim said after crossing the finish line. "I was able to run at a two hour nine-minute to ten-minute range time during practice.”

“I will do my best training for the next four months so that I can set a good record at Tokyo.”

Shim’s coach, Kim Jae-rong also said that “Shim has trained harder than ever. It is a great relief that we were able to seize such a rare opportunity.”

No female runners were able to make the cut — two hours 29 minutes and 30 seconds — at the Yecheon race.

However, two Korean female runners have already earned a spot at the Games.

The women's marathon at the Tokyo Olympics will take place on August 7 and the men’s marathon on August 8.

The IOC decided to hold the event in Sapporo in the North of Japan, rather than Tokyo because of concerns that it will be too hot in Tokyo for the long-distance event.