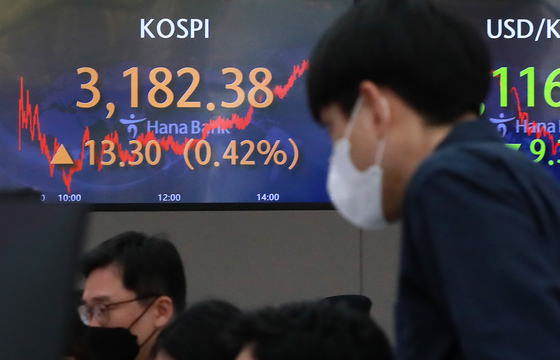 A screen in Hana Bank's trading room in central Seoul shows the Kospi closing at 3,182.38 points on Wednesday, up 13.30 points, or 0.42 percent from the previous trading day. [NEWS1]


Stocks closed a tad higher to extend their winning streak to a third day Wednesday as investor sentiment was boosted by the country's better-than-expected jobs data, coupled with an overnight rally on Wall Street. The won rose against the dollar.

Investors' sentiment was also boosted by overnight gains on Wall Street, where the S&P 500 closed at a record high level on the back of gains in tech shares.

Analysts said the suspended use of the single-dose Covid-19 vaccine by Johnson & Johnson in the U.S. is not likely to have a long-term impact on the market.

"Overnight, the issue had only a limited impact on the U.S. stock market as well. It is not likely that the issue will spread further," said Kim Yoo-mi, an analyst at Kiwoom Securities Co.

Carmaker Hyundai Motor advanced 1.09 percent to 232,500 won after the firm announced its plan to resume the operation of one of its production lines following a weeklong suspension due to a chip parts shortage.

The local currency closed at 1,116.60 won against the dollar, down 9.3 won from the previous session.