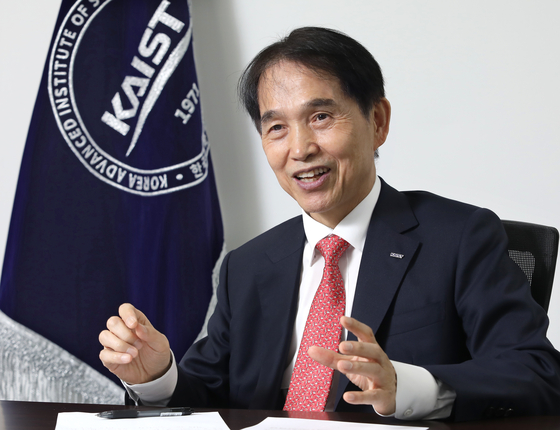 
One of the pledges by new KAIST President Lee Kwang-hyung is to make students study less, a direction that borders on bizarre in Korea’s fiercely competitive education system, and even more so for the top-tier research university.

The initiative is intended to give students — mostly science and engineering majors — more time to think and explore other activities rather than just cramming in a classroom.

The 66-year-old president, who formerly served as a bio and brain engineering professor at the institution, wants those enrolled to dream big to tackle high stakes issues instead of just becoming employees at conglomerates.

To encourage entrepreneurship among the students, he plans to set up a campus in Silicon Valley.

Other focuses will be on hosting more overseas students, especially from countries that supported the South Korean military during the Korean War.

The Korea Joongang Daily sat down with Lee to discuss his plans for the institution’s campaign to make students study less, overseas satellite campuses and internationalization.


Q. What made you pitch the “study less” campaign?

A. Humans are designed to be passionate about what they love. This means we devote ourselves to the work that we want to do. So, it is critical to know where each individual’s passion can thrive.

When students are forced to study, it is hard for them to find any joy in it. Many KAIST students appear to feel the same way. They all have excellent talents, but few know what they can do outside of campus with the knowledge they have earned. The lack of awareness led me to launch the campaign.

I have encouraged professors to reserve one or two sessions from the 16-week semester for other activities. It could be reading books and discussions or going somewhere where they can learn something.

Reading is exceptionally important because it can help students explore new ideas. Those sessions should be extracurricular and not related to grades, because if they were graded, students will be preoccupied with getting a good score rather than genuine exploration.

It could be a small step to steer students toward thinking about what they can do for the world or any big ideas.


You have said that more KAIST students should use their expertise for solving large-scale problems facing humanity. What are the examples of the problems?

There are various ways to benefit humanity, but I think the notion of sustainable development is essential to cope with the pressing issues related to the environment, energy resources, life science and diseases.

Projects or companies aimed at enhancing sustainable development will make a better world and actually that direction is where abundant funding and investment is coming from. When we work on such projects, people tend to feel more self-fulfillment compared to the confined tasks at large companies.

Despite the fact, not many college graduates are willing to jump into the fields because the area lacks security. The uncertainty is off-putting for many so the majority of graduates opt to land a job at big corporations in pursuit of a stable life.

KAIST students should be different. They could go back to big-name companies whenever they want even if they fail with their own business. But I hope they will give more meaningful initiatives a try.


You also raised the need to establish a satellite campus in Silicon Valley in a previous interview. Do you have any plans to realize that during your term as president?


Yes. I want to build a KAIST campus in the United States and other countries during my term. The first location will be in Silicon Valley to collaborate with tech companies there and we could extend the network to Boston where a number of high education institutions like Harvard and MIT are located.

At the same time, KAIST will continue to help developing nations emulate the success of the university by sharing operational knowledge. For instance, we started offering a consultancy in 2019 for Kenya's first advanced science and technology institute.


You were a visiting professor at Stanford University in the mid-1990s. Did that stint lead you to envision a branch in Silicon Valley?

It was definitely an eye-opener for me because there, virtually everyone was into building their own businesses. Wherever I went — from the labs at the college to restaurants — people were talking about start-ups.

I was eager to have the students in Korea exposed to that culture or mindset, so I launched a training program that connects the students with the companies in Silicon Valley. I approached several start-ups to suggest that my students can provide some engineering skills for six months. They were tech start-ups including AIO and PSI, although it appears two of them no longer operate under those names.

The companies were so satisfied with the performance of our students that they wanted to extend the contract period. There, they learned that small ideas can turn into a serious business model, which also motivated their alumni back home.

Many colleges support entrepreneurial activities these days, but back in the 1990s, many held skeptical views about so-called “venture” companies. Prestigious universities were considered a sacred place where text-based academic learning should be prioritized. That perception has changed dramatically.


You are known for growing a number of tech gurus from your lab during that period. Did you foresee the burgeoning tech boom?


Not really. I just wanted to let my students do what they wanted to do, because that typically brings great results, though not always. That could be research for someone or running their own business for others. Doing nothing is a serious problem. If one has his or her own initiative and pushes through with it, I see no problem.

I don’t grill my students for not attending some seminar sessions or writing a high-quality research paper if they have something going in their own field. But twenty years ago, the atmosphere was quite different. If we wanted to scout engineers from other labs to start a business, it had to be done secretly.

A security company called Idis is the brainchild of a graduate students who snuck into other labs to recruit founding members of the company that now generates hundreds of billions of won in sales. They kept it secret until their graduation. Now things have changed, and I would even go so far as to say that every lab should build at least one incorporated unit.


Still, research is crucial to solving big problems and preparing for a better future. Which area of research do you think is going to be more critical in the future?


We need to delve into the sectors that we can’t see now. They're not seen because they haven’t taken place yet, but will happen.

For research concerning artificial intelligence (AI), we should not be too focused on advancing a certain kind of technique or technology per se. Instead, we should attain a profound understanding of humans’ underlying desire or nature to dictate the direction of AI development. This subject is what I call “Post AI research.” I have already gathered interested researchers to examine the theme.


Engineering majors could find it hard to go beyond their technical field and bring an investigative mindset into their research. How can KAIST help students develop that approach?

That approach should start in their lectures. We already have liberal arts electives. I don’t think it is wise to increase the required credits of that, because it will come off as pressure for students to get good scores. I hope general courses like engineering and natural sciences could combine related humanities subjects into existing sessions. That would allow them to have free discussions or writing to internalize what they learn.


You also brought up the need to bring more foreign faculty and students to KAIST. Why is this important and how can it be done?

To start with, we have too few foreign staff and students. They now account for about 8 percent, but I think the proportion should go up to 15 percent. To attract high quality talent, we should offer better benefits. To do that, I extended the period of free residency for foreign professors from two years to 10 years.

My focus is to have more students and staff from countries that supported South Korea during the Korean War. Many of those countries including Ethiopia, the Philippines, Colombia, Turkey and Thailand have undergone tumultuous political conditions and face a multitude of problems including poverty. We should pay them back by providing quality education.

Also, I will seek different channels to bolster collaborative projects with overseas colleges and institutions, given that it is always beneficial to work on research with those from diverse backgrounds.