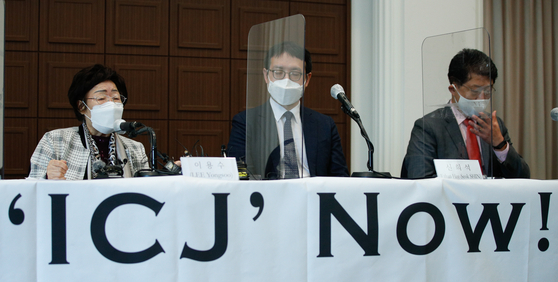 Lee Yong-soo, left, a survivor of the Japanese military’s wartime sexual slavery, speaks during a press conference demanding the referral of the so-called comfort women issue to the International Court of Justice (ICJ) at the Korea Press Center in central Seoul Wednesday. She said that she wishes President Moon Jae-in would convince Japanese Prime Minister Yoshihide Suga to take the issue to the Hague-based ICJ to get a proper apology. She also mentioned she wishes to meet U.S. President Joe Biden and ask him to play a mediator role. [NEWS1]