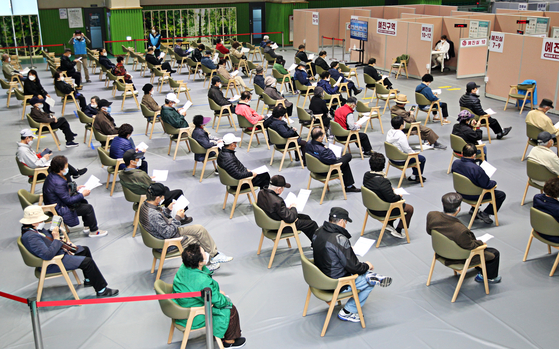 Senior citizens wait to get Pfizer shots at a Covid-19 vaccination center in the Sadang Sports Complex in Seoul on Wednesday. [YONHAP]


Korea may be facing two setbacks in its inoculation program after U.S. health authorities called for a "pause" in the administering of Janssen’s vaccines and deliveries of the Moderna vaccine may be delayed.

On Tuesday, the U.S. Food and Drug Administration (FDA) and Centers for Disease Control (CDC) jointly recommended that Johnson & Johnson’s Janssen vaccinations be halted after examining six cases of "rare and severe" form of blood clotting.

Soon after, the U.S. pharmaceutical company announced it would delay its vaccine rollout in Europe.

Despite growing concerns about the vaccine’s safety, Korea’s health authority said they have not changed their plan to buy the one-shot dose vaccine.

“We will continue to conduct safety reviews with the KDCA while monitoring [the U.S. situation]."

The Ministry of Food and Drug Safety said Wednesday that it has asked Janssen Korea for information on blood clot cases in the U.S. and other foreign countries, and will make a decision on additional measures after reviewing data and the results of the U.S. investigation.

Being the only single-shot vaccine, the Janssen vaccine was seen as a game changer in speeding up Korea’s immunization drive.

Janssen vaccines were authorized in Korea on April 7, but were advised to continue monitoring for side effects.

Korea was planning to receive delivery of six million Janssen doses in the second quarter of this year and begin administering in the third quarter, but they haven’t been imported or administered yet. 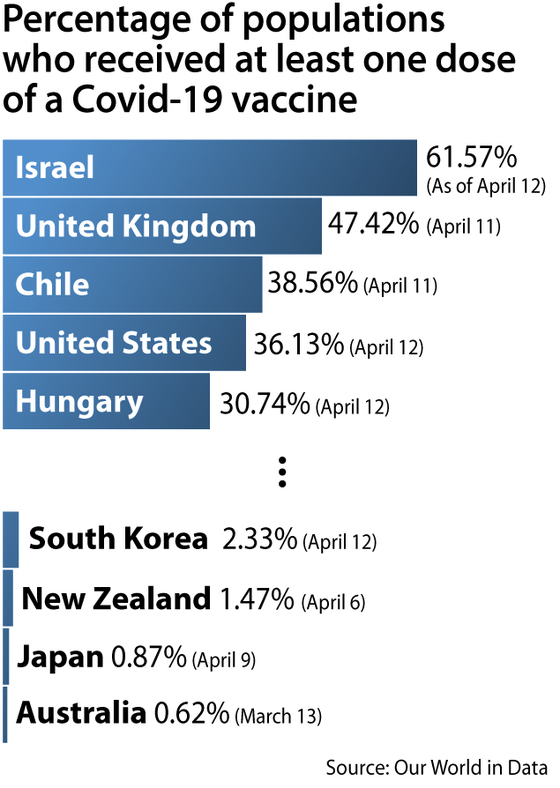 Korea earlier announced that it would procure vaccines from Janssen, Moderna and Novavax in the second quarter, but the dates and initial delivery amounts have not been confirmed.

Deliveries of Moderna’s 40 million doses, which were arranged after discussions between President Moon Jae-in and Moderna CEO Stéphane Bancel in December last year, are even more important after worries have grown about both the AstraZeneca and Janssen vaccines. On Monday, GC Pharma applied for approval to import the Moderna vaccines.

Deliveries, however, may be pushed back as the U.S. pharmaceutical company announced Tuesday it will deliver 200 million doses to the United States by the end of July.

Out of around 132 million vaccines supplied by Moderna from the end of last year to April 12, only about 15 million were sent outside the U.S.

Korea signed with Moderna at the end of last year, but there is a possibility that the country’s deliveries will be delayed as the European Union (EU), the United Kingdom, Japan, Canada, Switzerland, and Qatar signed contracts earlier.

Korea originally planned to achieve herd immunity by November, but problems with three major vaccines are casting doubts on that goal.

To make matters worse, Korea's daily new coronavirus cases rebounded to over 700 on Wednesday with 731 cases, which is the highest since Jan. 7's 869 new cases.

The country added seven more deaths, raising the total to 1,782.

Regarding the spike of Covid-19 cases, health authorities warned of stronger restrictions if virus transmissions show no signs of easing.

"We will consider adjusting the social distancing measures and restrictions on business operation hours after closely monitoring this week's situation," Yoon Tae-ho, a senior official of the Health Ministry, said in a briefing.

The current social distancing levels are Level 2 for the greater Seoul area, Busan and Daejeon, and Level 1.5 for other regions. Level 2 is the third highest in the country's five-tiered distancing guidelines, followed by Level 1.5.

Sporadic infections are continuing across the country and the proportion of "hidden infections" -- those unable to trace how they contracted the virus -- has almost reached 30 percent.

Infections in greater Seoul also were the highest since Jan. 7 with 509 new cases, accounting for 71.3 percent of the total caseload.

Seoul recorded 245 cases, followed by Gyeonggi with 238 and Incheon with 26.

A total of 205 cases were outside the capital area, including 48 in Busan, 30 in Ulsan, 29 in North Chungcheong. 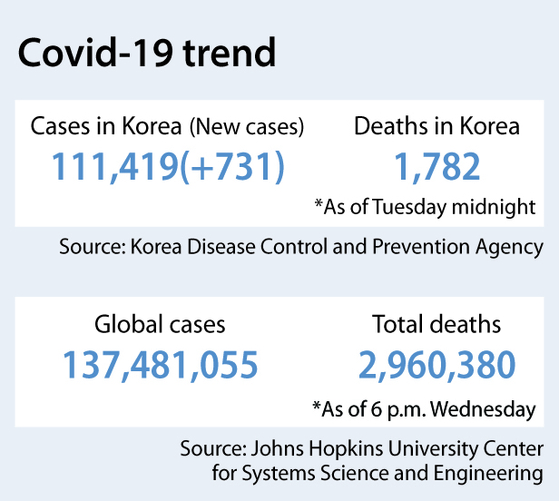 For outside the Seoul metropolitan area, about 10 people were infected at a church in Goesan, North Chungcheong, and a hostess bar cluster in Busan now totals 418 infections.

In Ulsan, there have been a series of infections tied to an automobile parts supplier, family and acquaintance meetings, and a customer center.