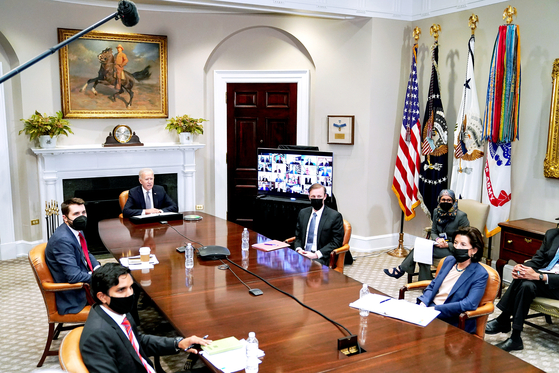 U.S. President Joe Biden speaks during the virtual CEO summit on semiconductor and supply chain at the White House on Monday. [EPA/YONHAP]

PARK SANG-HYUN
The author is a media critic and media director of C.O.D.E.,the Korean branch of Creative Commons.


Due to the worldwide shortage of semiconductor chips after the pandemic, carmakers in North America such as GM and Ford have temporarily suspended factory operations or reduced production. Kia and Toyota are among the companies with factories in the United States.

Since last summer, productions of laptop computers, smartphones and game consoles were affected, but semiconductors for cars are especially short on the ground because they have low profit margins and not many companies produce them.

The U.S. government is not considering the situation as a one-time event. The White House announced a budget that includes $150 million in subsidies to encourage semiconductor production in the United States. Intel announced a plan to invest $20 billion to build two factories in the U.S.

China is also not willing to rely on foreign production for semiconductors. Chinese President Xi Jinping announced a five-year plan to lower dependency on parts from the West.

At the center of the rivalry between the two powers over semiconductors is Taiwan. Taiwanese company TSMC, the world’s first dedicated semiconductor foundry and the leading company in its field. TSMC is essential to American companies and one of the major reasons that the United States is wary of Taiwan being under the influence of China.

Lately, the United States is cautious as it has detected moves that China is attempting to control Taiwan, and the Chinese government warned that the United States “crossed the line” by expanding exchanges with Taiwan.

The comment was made after the Biden administration clarified that it supports Taiwan’s independence. As Taiwan emerges as the frontline of the economic and political discords between the United States and China, it is becoming the test bed of the problem-solving skills of the two countries’ leadership.