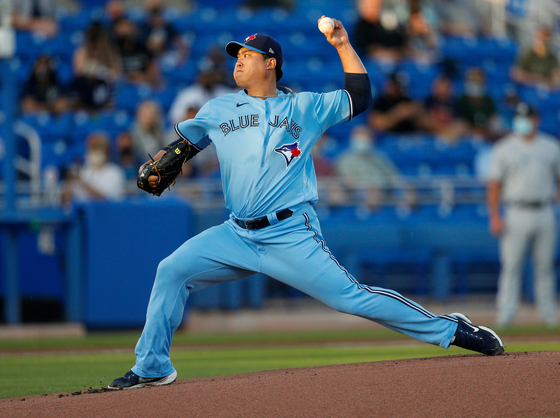 
Ryu Hyun-jin picked up his first win of the 2021 MLB season on Tuesday, leading the Toronto Blue Jays to a 7-3 victory over the New York Yankees.


In his third start of the 2021 season, the Blue Jays' ace pitched six and two thirds innings, giving up four hits with just one run crossing the plate, unearned as it was due to a throwing error.

Ryu allowed the Yankees no opportunities throughout the first five innings at TD Ballpark in Dunedin, Florida, with the only two base hits immediately canceled out by double plays. Ryu was especially dominant in the second inning, striking out the Yankees in order.

While Ryu took care of business on the mound, the Blue Jays' bats got to work as well.

After a quiet first inning, the Blue Jays started to offer Ryu some offensive support in the second.

A single from Randal Grichuk started off the inning, with a hit by pitch and a walk eventually loading the bases with two outs. A Josh Palocios single was all it took to bring two runners home and give the Blue Jays a 2-0 lead going into the second.

The Toronto team added on over the next few innings, scoring one in the third, two in the fourth and one in the fifth to lead the Yankees 6-0 with Ryu still dominating on the mound.

The Yankees started to fight back in the seventh, when a fielding error allowed Gary Sanchez on base, eventually coming around to score New York's first run. That was enough for Ryu, who was taken out the game for David Phelps.

The Yankees scored two more in the eighth while the Blue Jays added one more to take the score to 7-3 to Toronto for Ryu's first W of the season.

Before Tuesday's game, Ryu has picked up a no decision and a loss in his two outings this season.

In Ryu's opening game, also against the Yankees, the Blue Jays won 3-2 but the runs came after Ryu had left the mound. Last week, he picked up a loss against the Texas Rangers, but still pitched a full seven innings with seven strikeouts and seven hits.

After Tuesday's outing, Ryu's ERA has fallen to 1.89 for the season with 15 hits and four earned runs in 19 innings pitched.

Ryu lands on 10-day IL after rough start to season