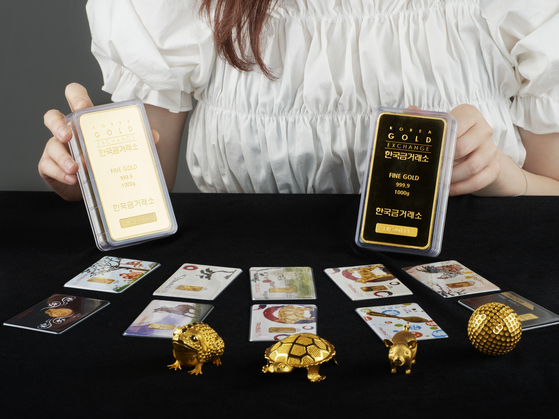 Gold products are displayed at the Korea Gold Exchange in Jongno District, central Seoul. Demand for gold, a safe haven asset, has been rising due to inflation fears. [KOREA GOLD EXCHANGE]

Koreans can purchase gold through brokerage houses, via home shopping channels and online.

"A growing number of people are buying gold since the beginning of the year as the price has been declining," said Song Jong-kil, executive director at Korea Gold Exchange.

Song added that gold for delivery was delayed for about a week last month due to the shortage of physical gold.

The declining gold price is the biggest reason behind the high demand.

Gold prices are declining even in the international market.

When people worry about inflation, gold becomes more popular than cash due to the eroding value. Gold is considered one of the key safe havens.

"In the case of investors who put more importance on protecting their assets than making gains, they prefer gold over bitcoin."

The number of Shinhan Bank Gold Riche gold-buying accounts totaled 163,875 as of April 13, up 12,000 on year. The gold-linked deposits allow customers to switch won to gold.

Opinions on the future of the gold price are mixed. Some say the price of gold will surge while others believe rising interest rates will take a toll.

"Gold acts as a hedge against inflation and for investors who wish to avoid asset losses," said Shim Soo-bin, an analyst at Kiwoom Securities.

Kim Kwang-rae, an analyst at Samsung Futures, remains skeptical about it.

"As the dollar remains strong and interest rates have been rising, it's unlikely that the price of gold will surge," said Kim.

Na Joong-hyuk, an economist at Hana Financial Investment, warns investors that this might not be the right time to purchase gold as "the price may decrease further."

"The international price of gold could possibly be declined as low as 1,600-dollar mark," said Na.