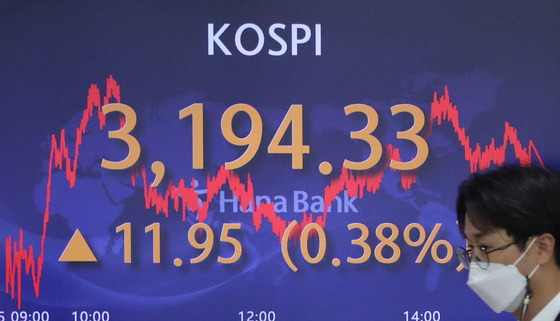 A screen in Hana Bank's trading room in central Seoul shows the Kospi closing at 3,194.33 points on Thursday, up 11.95 points, or 0.38 percent from the previous trading day. [YONHAP]


Stocks finished higher to extend their gains to a fifth session Thursday amid expectations that economic recovery will be quicker and stronger than expected. The won fell against the dollar.

Stocks got off to a muted start, as the country may adopt stronger social distancing measures if daily COVID-19 cases remain high throughout the rest of the week.

Concerns over fast post-pandemic inflation decreased, and the central bank froze the key interest rate at a record low of 0.5 percent, saying the economic recovery has been patchy due to the resurgence of the coronavirus.

Bank of Korea chief Lee Ju-yeol said Asia's fourth-largest economy is expected to grow at a faster-than-expected clip this year.

The local currency closed at 1,117.6 won to the dollar, up 1 won from the previous session's close.

Bond prices, which move inversely to yields, closed lower. The yield on three-year bonds added 4.7 basis points to 1.149 percent, and the return on the benchmark ten-year government bond rose 1.1 basis points to 1.63 percent.