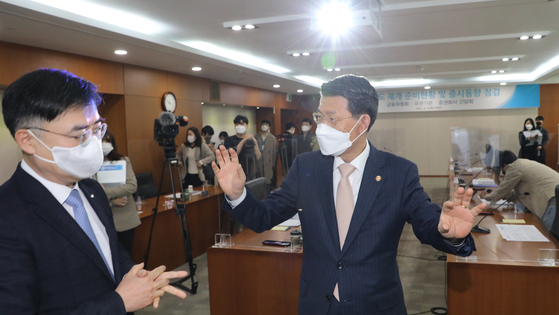 Financial Services Commission Chairman Eun Sung-soo, right, speaks with Korea Exchange CEO Sohn Byung-doo ahead of a meeting with brokerage CEOs at the KRX office in Yeouido on Thursday. [YONHAP]

"The KRX has assembled a special team," he said in a meeting with brokerage CEOs ahead of a lifting of short-selling restrictions in May.

The chairman added that the government will continue to work to allay concerns of some investors about the practice again being allowed in Korea, as it is seen forcing down the prices of stocks.

Short selling is when an investor borrows stock and sells that stock immediately in hopes of buying it back at a lower price, repaying the loan and profiting from the difference.

"We will carry out improvements in the system as promised," Eun said. "The improved system has been applied since this month, including the strengthened penalty against illegal short selling."

He asked for cooperation from the private sector regarding the resumption of short selling.

Since April 6, anyone violating the rules on short selling has faced a jail sentence of up to a year and fines of up to five times the financial losses caused.

As part of the market improvements, retail investors have been given the opportunity to qualify for greater access to shares for borrowing.

Short selling has been prohibited since last March after stocks started dropping due to the pandemic. The restrictions were to be lifted in March this year, but investors opposed the move, which was delayed.

They believed that short selling could end the bull run.

The FSC instead partly lifted the ban on May 3 and is limiting the practice to Kospi 200 and Kosdaq 150 stocks.

That's 22 percent of the 917 Kospi shares and 10 percent of the 1,470 Kosdaq shares. The prohibition on the short selling of the 2,037 stocks will continue without a specific end date.

The FSC chairman also said he is concerned that promising tech companies are choosing the U.S. markets over the KRX. Last month Coupang listed on the New York Stock exchange.

He asked the stock market to help promising companies list locally, which would increase opportunities for local investors.

Eun said the recovery of Kosdaq to 1,000 points for the first time in two decades is the result of cooperation by local financial institutions, investors and the government.

The government "will provide support so that promising innovative start-up companies will list on the Kosdaq market, which will contribute to the nation's economy," Eun said.

Eun added that the government will crack down hard on investors that distort the equity market, including those manipulating prices through insider trading.

"They are like poisonous mushrooms that grow on the tears of honest investors," Eun said.

He said he too recently received text messages offering inside information.