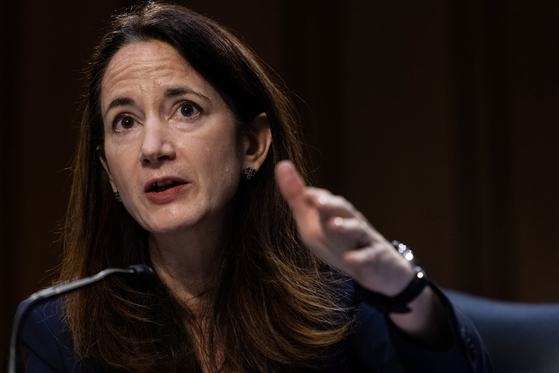 Director of National Intelligence Avril Haines testifies during a hearing held by the U.S. Senate Select Committee on Intelligence about worldwide threats, including North Korea, in Washington Wednesday. [EPA/YONHAP]


North Korea may resume its nuclear and intercontinental ballistic missile (ICBM) tests as part of efforts to drive wedges between the United States and its allies, said the U.S. intelligence chief in a Senate hearing Wednesday.

Avril Haines, director of national intelligence (DNI), told the Senate Intelligence Committee in Washington in a hearing on current global threats, “For its part, North Korea may take aggressive and potentially destabilizing actions to reshape its security environment and will seek to drive wedges between the United States and its allies.”

She continued, “These efforts could include the resumption of nuclear weapons and intercontinental ballistic missile testing.”

North Korea has halted nuclear tests and long-range missile launches since late 2017 in the spirit of diplomacy with the United States.

However, North Korean leader Kim Jong-un announced an end to Pyongyang’s self-imposed moratorium on nuclear weapons and ICBM testing in December 2019, following impasse in the denuclearization negotiations with the Donald Trump administration since the second North-U.S. summit in Hanoi, Vietnam, that February.

Haines and other U.S. intelligence agency leaders testified in the first such public “Worldwide Threats” hearing since January 2019, previously an annual event before the Trump administration. North Korea was listed alongside China, Russia and Iran as countries posing the biggest national security challenges to the United States in the coming year.

VanHerck said in his written testimony that despite U.S. efforts last year to reach an agreement with Kim Jong-un, “North Korea continued its development of ICBMs capable of striking targets in the United States.”

He continued, “In October 2020, North Korea unveiled a new ICBM considerably larger and presumably more capable than the systems they tested in 2017, further increasing the threat posed to our homeland.”

North Korea, in the military parade on Oct. 10 last year marking the 75th anniversary of its ruling Workers' Party “unveiled a new ICBM considerably larger and presumably more capable” than the systems they tested in 2017, he added.

Along with the new road-mobile ICBM presumably to be a Hwasong-16 ballistic missile, Pyongyang also revealed what analysts believe to be a new solid-propellant submarine-launched ballistic missile (SLBM) in the parade.

VanHerck added that North Korea has indicated that it is “no longer bound by the unilateral nuclear and ICBM testing moratorium announced in 2018,” a sign that Kim “may begin flight testing an improved ICBM design in the near future.”

He noted that the Kim regime “has achieved alarming success in its quest to demonstrate the capability to threaten the U.S. homeland with nuclear-armed ICBMs,” believing such weapons are necessary to ensure the survival of his regime and to deter U.S. military action.

VanHerck said that his command is working the Missile Defense Agency “toward a layered missile defense capability that will allow for a more flexible and responsive defense of the homeland against both ballistic missile and cruise missile threats,” noting that the test last November destroying an ICBM with a Standard Missile-3 Block IIA, or SM3-IIA, interceptor “was a historic achievement and a critical step toward establishing this layered capability.”

The 2021 Annual Threat Assessment of the Intelligence Community report released by the Office of the Director of National Intelligence earlier this week outlined the U.S. spy agencies’ views of the key foreign policy issues facing U.S. President Joe Biden in his first year in office, complicated by the coronavirus pandemic and global climate change.

According to the DNI assessment, North Korea “will be a disruptive player on the regional and world stages” and continue to pose a weapons of mass destruction (WMD) threat.

The report found that North Korean leader Kim “may be considering whether to resume long-range missile or nuclear testing this year to try to force the United States to deal with him on Pyongyang’s terms.”

The report assessed that North Korea “will pose an increasing threat to the United States, South Korea, and Japan as it continues to improve its conventional military capabilities, providing Kim with diverse tools to advance his political objectives or inflict heavy losses if North Korea were attacked.”

The Biden administration has been pushing for better trilateral cooperation with allies Seoul and Tokyo and is set to finalize its Pyongyang policy review soon.

The report concluded that North Korea “will be a WMD threat for the foreseeable future, because Kim remains strongly committed to the country’s nuclear weapons,” and is actively engaged in ballistic missile research and development and its chemical or biological weapons program.

Pyongyang, it added, showed a developing and more diverse strategic and tactical ballistic missile force during its military parades in October 2020 and January 2021.

However, the reported noted that “Kim thus far has not conducted long-range missile testing and has left the door open to future denuclearization talks with the United States.”

The report said North Korea potentially stole hundreds of millions of dollars through cyber theft against financial institutions and cryptocurrency exchanges worldwide, possibly to fund its nuclear and missile programs.

A test we ignore at our own peril (KOR)

A test we ignore at our own peril