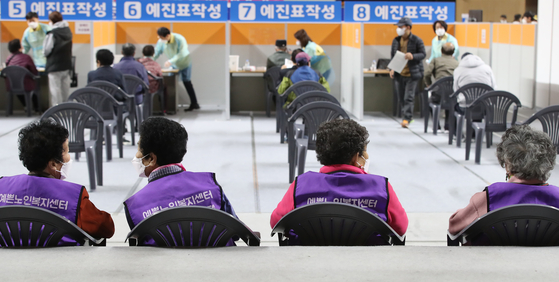 Senior citizens wait to get Pfizer shots at a newly-opened Covid-19 vaccination center in the Gyeongsan Indoor Stadium on Thursday. [NEWS 1]

“A domestic pharmaceutical company is in the process of finalizing a specific contract for producing a vaccine approved overseas,” said Baek Young-ha, head of Korea's vaccine introduction team, in an online briefing on Thursday. “The approved vaccines will be mass produced in Korea starting in August."

The government did not specify the names of the vaccine or the pharmaceutical company. It said it will disclose them once a contract is signed.

Currently, vaccines that have been approved overseas include those by AstraZeneca, Pfizer, Moderna, Janssen, Sputnik V and Sinovac.

Regarding the Janssen shots, which were suspended in the U.S. after reports of rare blood clots, health authorities reiterated that they have not changed plans to buy the vaccine.

“The procurement of vaccines is important right now, so we are not considering changing the contract yet,” said Baek. 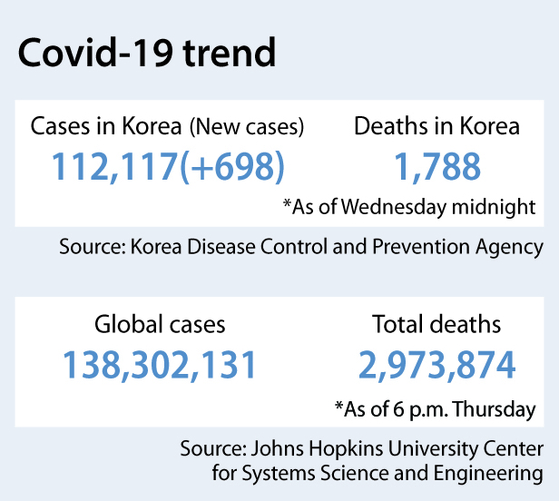 While Seoul alone recorded more than 200 new cases for two consecutive days, the Seoul metropolitan government is considering introducing home testing kits for Covid-19 at schools, although there are concerns about their reliability.

The Covid-19 test kits are a project promoted by the newly-elected Seoul Mayor Oh Se-hoon.

Unlike PCR tests, which are used by medical institutions, over-the-counter Covid-19 test kits can identify infections in about 30 minutes. Although the early detection is an advantage, there are limits to their accuracy.

Mayor Oh initially suggested using them at noraebang (singing rooms) and bars, but then said schools would use them first.

"There were many positive opinions on introducing the kits in schools for a trial run, as the advantages are much greater, such as having better accessibility for those who want to get tested,” said Park Yoo-mi, the city government’s general director for citizen's health in a press briefing Thursday.

“We will create detailed guidelines on the introduction of test kits and their target groups based on opinions of experts.”

According to Seoul's government, the Ministry of Health and Welfare, the Ministry of Food and Drug Safety, and the KDCA will discuss how and when to use the kits, as well as the Seoul Metropolitan Education Office.

Seoul officials stressed that infection clusters are happening at schools.

"The confirmed rate of Covid-19 in under 19-year-olds went from 7 percent in January to 11.2 percent in late March,” Park said, adding, “There were 11 clusters that took place in schools since March.”

“Test kits are widely used abroad, and in the U.K., the reopening of all schools was decided after testing all students with a quick diagnostic kit,” Park added.

However, the Seoul Teachers and Education Workers Union released a statement objecting to the plan.

In addition to its low reliability, the Union wrote, “The kits may be effective in facilities where people stay for a certain period of time, such as nursing homes, but they have to be used on a daily basis for students who come and go every day.”