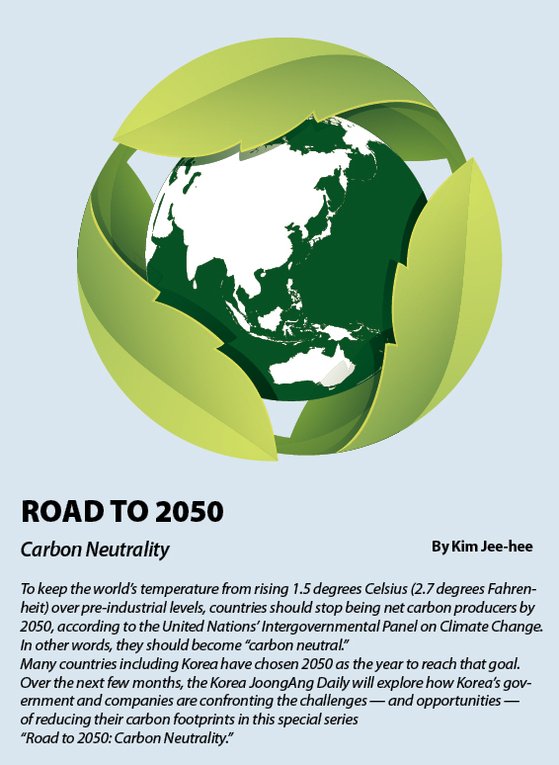 With surprising speed, carbon neutrality has become the professed goal of  the world's nations -- and if the race has begun, when and how it will end is a question for the entire human race.

That the climate is changing can hardly be denied, and its effects are showing in destructive rains and typhoons and other freakish weather events.

The European Union, which is leading the world in establishing green policies, announced in 2018 that it will achieve net zero carbon emissions -- which is what carbon neutrality means -- by 2050. It also vowed to cut emissions by 55 percent compared to 1990 levels by 2030.

One of Joe Biden's major pledges during his presidential campaign was to bring the United States back into the Paris Agreement, a legally binding international treaty on climate change. Biden also proposed a goal for the U.S. to achieve carbon neutrality by 2050.

With all these pledges coming thick and fast, Korea could hardly dawdle. 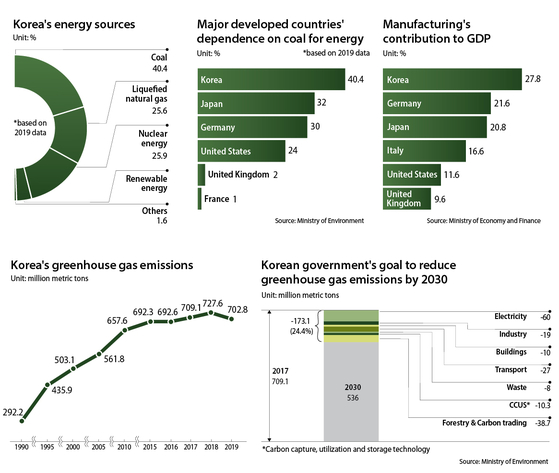 Last October, the Moon Jae-in administration ambitiously announced that Korea will also be carbon neutral by 2050.

Korea relies heavily on fossil fuels for its energy, despite also having a nuclear energy industry. It's a manufacturing powerhouse punching far above its weight in terms of its size or population, with very large industries known for pollution such as steel making and oil refining.

As of the end of 2019, roughly 40 percent of the country’s electricity came from coal-fired plants. Another 25.9 percent came from nuclear. Renewables accounted for a mere 6.5 percent of its energy supply, according to a report by a number of ministries in December. At that same moment, fossil fuels were responsible for 32 percent of energy supply in Japan, 30 percent in Germany and 24 percent in the United States.

Korea has to get serious about the issue not merely because of climate change or to be a good global citizen. Its trading partners are almost guaranteed to put in place a new universe of regulations related to carbon emissions.

Europe is considering a carbon border tax, which would be a tariff on carbon emissions attributed to imported goods that have not been carbon-taxed by the source country. In the U.S., Biden has also advocated similar mechanisms such as carbon adjustment fees or quotas on carbon-intensive goods.

A January report by Ernst & Young Korea and Greenpeace Seoul predicted that if a carbon border tax is introduced in 2023, Korea will pay approximately $530 million yearly in the new tax.

“Greenhouse gas emissions will become a new barometer for the world’s trade and society,” said Lee Yu-jin, a researcher at the Green Transition Institute, in a report last month.

Moon's administration is pushing a Green New Deal — a package of policies aimed at ending Korea’s dependence on fossil fuels with increased investments in renewable energy. It was first announced last July.

In an address last month, Moon said, “We need to reform politics, the economy, society and culture on the ground that Green New Deal is our only way to survival.”

Moon said he will commit 8 trillion won ($7.2 billion) in investment in the Green New Deal this year.

To reduce dependence on fossil fuels, the government will foster renewable energy facilities. Energy production capacity from solar and wind power plants will be expanded from 12.7 gigawatts (GW) in 2019 to 26.3GW by 2022 and 42.7GW by 2025.

While Moon announced in December that the government set a goal to reduce greenhouse gas emissions by 24.4 percent compared to 2017 levels by 2030, which would be 536 metric tons, the president said goals for 2030 will be updated within his term to make 2050 carbon neutrality a more viable target.


Experts say that the success of Moon's plan will depend on how well the government and companies come up with technologies to reduce carbon in power generation and manufacturing.

Carbon-reducing technologies include hydrogen-based steelmaking, a technology to replace coal with hydrogen within the steelmaking process; and carbon capture, utilization and storage, or CCUS, technology, which refers to a set of technologies that trap carbon dioxide emissions from industrial processes before storing them underground or using them for a range of industrial applications.

"If the country successfully comes up with new technologies to reduce carbon in manufacturing before others, the carbon neutrality movement could become a fresh growth engine for Korean companies," said Jung Eun-mi, senior research fellow and executive director at the Korea Institute for Industrial Economics & Trade.

"If, however, the government and companies fail to respond to this paradigm shift, they will have to depend on technology imports from countries taking leadership in carbon reduction such as European countries."

Jung said the government needs to develop a nationwide program to support companies or industries to adopt low-carbon emitting manufacturing processes by offering incentives for research and development.

Apart from yearly targets, more detailed guidelines and scenarios to achieve carbon neutrality by 2050 will be introduced by the Korean government in June.