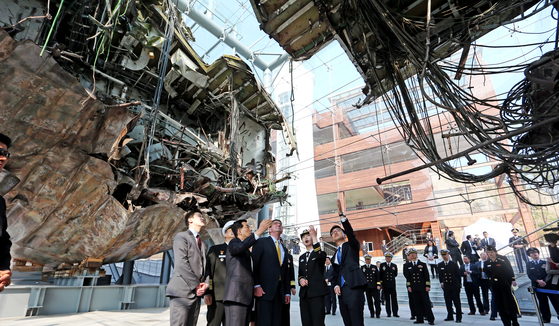 U.S. and South Korean military officials visit the wreck of the Cheonan in 2015. [JOINT PRESS POOL]


Documents made public by opposition party members on Sunday revealed that leading members of a presidential commission approved of the decision to investigate whether the sinking of the Navy corvette Cheonan was caused by the ship running aground, as claimed by a former member of a committee that investigated the tragedy.

The Presidential Truth Commission into Deaths in the Military submitted an investigation plan, drafted Dec. 14, to People Power Party lawmakers Ha Tae-keung and Han Ki-ho, which states, “The commission intends to probe and scientifically verify whether the Cheonan sinking was caused by an explosion resulting from a North Korean torpedo attack or a collision after running aground.”

The theory that the Cheonan sank due to an underwater collision has been touted repeatedly by Shin Sang-cheol, a former member of the South Korean-led multinational Joint Civilian-Military Investigation Group (JIG) which looked into the sinking.

The JIG issued a summary of its findings in May 2010, which concluded that the Cheonan sank due to a non-contact underwater explosion caused by a North Korean torpedo detonating close enough to the stern section of the hull to cause severe damage.

The plan submitted by the commission to lawmakers Ha and Han also said, “We will question surviving crew members and military autopsy officials at the time as witnesses,” reflecting Shin’s argument that military autopsies that listed drowning as the cause of death for all 46 crew members did not reconcile with the official explanation of a North Korean torpedo attack.

Kim Yeong-soo, chief of the Public Interest Reporting Center for a Transparent Society and a former investigative official at the presidential commission, said, “According to the rules, [investigation plans] must be signed off by the investigators tasked with the probe. I have never seen a plan approved without such signatures.

“Judging from the circumstances surrounding this plan, it appears to me that senior commission officials decided to green-light a new probe over the opposition of the investigators.”

Other irregularities have also been detected in the commission’s decision to commence a new investigation before it backtracked due to opposition from survivors and relatives of the dead.

An anonymous source in the commission told the JoongAng Ilbo that the Sept. 7 petition for a re-inquiry from Shin Sang-cheol was denied at first because Shin did not meet the requirements as a petitioner, directly contradicting the commission’s initial explanation on April 1 that it accepted Shin’s petition because he qualified.

According to the source, the commission reviewed Shin’s petition and mailed him an official denial under the name of the commission’s chief Lee In-lam. The denial was issued with an explanation written by the commission’s legal affairs team, telling Shin he did not meet the requirements to qualify as a petitioner.

Shin did not respond to the denial until Oct. 14, a month after the commission stopped accepting petitions, when he demanded that the petition be taken up anew. In an interview with the JoongAng Ilbo, Ko said he received a phone complaint from Shin over the denial. According to the commission, Lee ordered the petition be processed once again two days after the complaint.