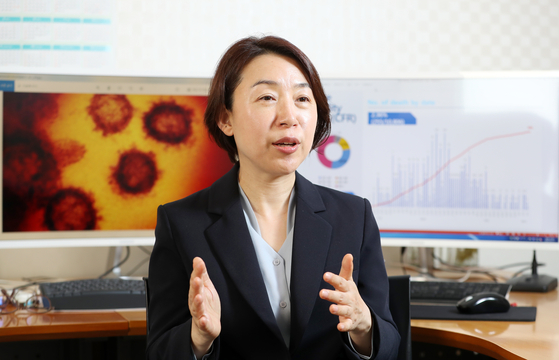 In this file photo, Ki Mo-ran, professor of preventive medicine at the National Cancer Center, is interviewed by the JoongAng Sunday in her office on May 11, 2020. [SHIN IN-SEOP]


President Moon Jae-in’s pick to coordinate disease control and prevention from the Blue House is getting blowback.

Moon named Ki Mo-ran, a professor of preventive medicine at the National Cancer Center, to a newly created post of presidential secretary for disease control and prevention affairs on Friday.

Analysts said the post might be a good idea, but Ki is a controversial person to fill it.

“It is overdue that Moon decided to name an aide in the Blue House who will communicate with the Korea Disease Control and Prevention Agency [KDCA] and assist the president,” said Choi Dae-zip, head of the Korean Medical Association. “We should have had such an aide a long time ago. But naming Ki to the post is a wrong decision.”

Ki made some controversial comments in the past during interviews. Her remarks in an interview with the TBS FM's "Kim Ou-joon's News Factory" last November sparked a particularly strong backlash.

At the time, Ki said Korea didn't need to rush to source vaccines. The radio program has long been criticized for pro-Moon administration bias, and Ki appeared on it dozens of times in the past year.

When the appointment of Ki was announced, the Blue House said Moon picked her because she has promoted social distancing and disease control and prevention measures such as drive-thru tests.

Ki was a member of the government’s Covid-10 Advisory Panel. In February, she participated in drafting a new social distancing program.

Another expert, Professor Choi Jae-wook of the Department of Preventive Medicine at Korea University’s College of Medicine, said he opposes Ki’s appointment.

“I have read reports that the Advisory Panel had meetings, but the names of its full members were never released,” he said. “How can this be legitimate? Other countries made public the names of advisors and experts offer recommendations based on the assumption that their remarks will be made public.”

“She has made unscientific and political remarks ever since the pandemic started, and many medical experts strongly disagree with her,” Ma said. “The Blue House had never allowed the KDCA to have full authority in disease prevention and vaccine procurement. Now, it created a new post in the Blue House to oversee the agency.”

Government officials also expressed concern. “Public servants are seeing Ki’s appointment as a warning and a sign of distrust toward the KDCA and its head, Jeong Eun-kyeong,” said a government official.

“In the past, she repeatedly said it is not important to get vaccines, while the whole world was in a war to purchase vaccines,” said Rep. Yun Hee-suk of the PPP. “She misled the people, and experts criticized her for having betrayed her academic beliefs to defend the administration.”

The PPP issued a statement on Saturday urging Moon to withdraw his appointment. “She lacks abilities and she is politically biased,” the PPP said. “Moon must recant the appointment and make more efforts to secure vaccines.”