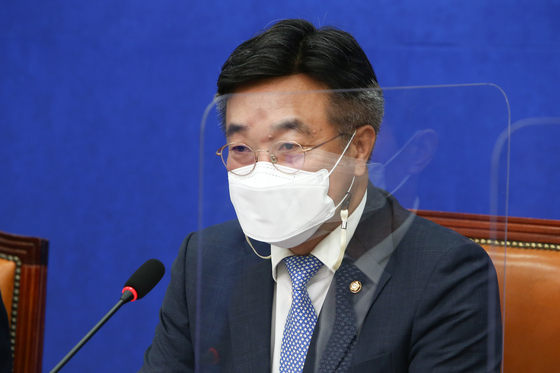 Yun Ho-jung speaks at a Democratic Party leaderhsip meeting at the National Assembly on Monday. [YONHAP]

The decision reflects the party’s belief that one of the main reasons for its landslide defeat is public disenchantment with rising assessed values of homes, real estate taxes, and restrictions on mortgages.

The special committee will include members of the legislature's Land, Infrastructure and Transport Committee, the Strategy and Finance Committee, civilian experts and heads of local governments.

Concerns over real estate issues are also reflected in the platforms of Song Young-gil, Woo Won-shik, and Hong Young-pyo, who are the main candidates for the DP’s chairmanship.

In an interview Monday with Gwangju MBC radio, Song said, “I will support President Moon Jae-in by correcting the incompetent reforms in the real estate sector.” Hong echoed similar sentiments in an interview with KBS. “We should be more forthright with the public about the need to fix loan regulations," he said, "to fit the reality of people getting loans to buy their first homes."

Hong’s comments suggest that the ruling party may loosen its current real estate policy, which has placed severe caps on mortgages and led to significant increases in the official valuation of residences, leading to higher taxes.

The assessed values of all apartments in 2020 rose 5.98 percent compared to the previous year, with the rise in Seoul being the sharpest at 14.73 percent.

As a result, the number of people liable for the comprehensive real estate tax, a property tax on apartments with assessed values exceeding 900 million won ($808,000), has risen rapidly under the Moon Jae-in government.

The capital gains tax for selling houses is also currently scheduled to be raised in June, with the government hoping the increase will incentivize homeowners to sell before the tax takes effect.

Public approval of the president, his administration and his party has dipped in recent weeks as those policies failed to curb real estate prices –– and actually made them rise. Revelations also came to light that DP legislators and government officials, including officials in the Blue House, hiked rents on apartments they owned just days before they rammed a rent increase cap through the National Assembly last July.

The ruling party’s focus on real estate concerns also marks a shift from its rhetoric on prosecutorial and media reform.

“The Democratic Party must be reformed by putting the livelihoods of the people front and center,” Yun said at Monday’s meeting. “Livelihood improvements will turn the front wheels of the vehicle, while political overhaul will turn the rear wheels.”