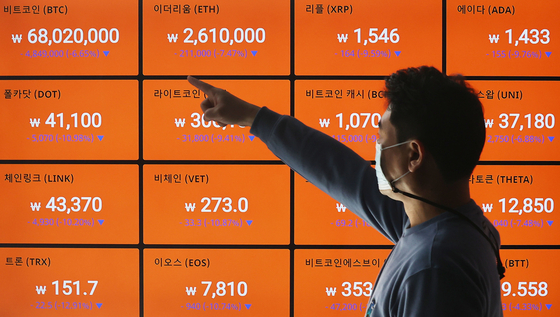 A digital screen shows cryptocurrency prices on Tuesday at Bithumb’s office in Gangnam, southern Seoul. More Korean investors are now scrambling to jump into cryptocurrency investments as stocks have been weak recently.[YONHAP]


Retail investors are piling into cryptocurrencies, and the effects on the financial markets and the job market are becoming very real, with funds moving away from the Korea Exchange and some people leaving their companies after having made quick fortunes.

The economy is slowly being eaten by blockchain-based assets.

A 61-year-old man who retired early last year started cryptocurrency investment in January. He put some 20 million won ($18,000) into altcoins, which are cryptocurrencies other than the original bitcoin, with the help of his children.

“I started investing in cryptocurrency as the Kospi and real estate have been bearish recently,” he said. “I haven’t seen that much gains yet, but I will continue the investment as it seems like cryptocurrency prices will increase further.”

Some Korean retail investors are getting bearish on stocks and going gaga for cryptocurrencies instead. Bitcoin is not the only popular cryptocurrency these days, and more people are turning their attention to altcoins in the hope of making quick gains.

More than 2.5 million trading accounts were registered at four major cryptocurrency exchanges in Korea — Bithumb, Upbit, Coinone and Korbit— as of end of February, according to Financial Services Commission (FSC) data.

That’s nearly double the total at the end of 2020.

Since early 2018, anyone who wants to invest in bitcoin must have an account in a commercial bank. The government required cryptocurrency exchanges to have a business relationship with banks that would issue accounts to fund trading on the exchanges.

Deposits in cryptocurrency trading accounts stood at 4.62 trillion won as of end of February, about 2.5-times the amount at the end of last year.

People in their 30s and 40s are the biggest players.

Transaction volume has been extremely high.

Cryptocurrency daily volume is higher than the volume of Kospi stocks traded.

Some 25.86-trillion-won worth of cryptocurrencies were traded on April 19 as of 5 p.m., according to cryptocurrency information provider CoinMarketCap. On the same day, the trading volume of Kospi stocks was 15.17 trillion won.

The prices of altcoins have been increasing more dramatically.

Meanwhile, the main Kospi index has traded poorly over the past few weeks.

Deposits in stock trading accounts was 65.65 trillion won as of April 15, compared to 74.46 trillion won on Jan. 12, according to Korea Financial Investment Association.

In January, Korean retail investors on average purchased some 1.29-trillion-won worth of shares every day. But the amount of daily purchase declined to some 20 billion won in April.

“Retail investors who entered stock market last year expected some 30 percent to 40 percent of gains,” said Hwang Sei-woon, a research fellow at the Korea Capital Market Institute. “But since the main index turned weak, some seeking high profits moved to the cryptocurrency market.”

The fear-of-missing-out epidemic is another contributing factor.

Reports of people quitting their jobs after earning billions of won through cryptocurrency investment can be found on the internet.

A Samsung employee on April 3 posted a message on Blind, a social media application specifically for the gainfully employees. It said a Samsung Electronics employee, who works for the semiconductor team, plans to quit his job after earning some 40 billion won through bitcoin investment. His seed money was about 200 million won. People who write on Blind must verify their name and employer.

The company declined to confirm the information, but a few days later a letter to colleagues was posted in the internet that may have been from the employee. 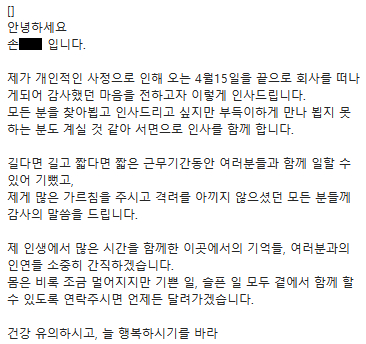 A letter known to be sent by a Samsung Electronics employee to his colleagues. It says he quits his job as of April 15 due to personal issues. He is known to be earned some 40 billion won through bitcoin investment. [SCREEN CAPTURE]


“I’m writing this to thank you all as I’m about to quit the company as of April 15 due to personal issues,” the letter read. “I was happy that I could work with all of you, and thank you all for the encouragement and education you gave me so far.”

A 37-year-old office worker recently sold 30-million-won worth of shares and put them in cryptocurrencies. He invested in altcoins that are not that familiar to retail investors, such as MiL.k Coin and MediCoin.

“I don’t think I could expect big gains from cryptocurrencies that have already experienced a surge in prices,” he said. “Dogecoin unexpectedly rose some 100 percent recently. If the price of only one of the cryptocurrencies that I invested in could increase, I would be able to make up the losses and even be left with some gains.”

Experts argue that proper regulations to monitor cryptocurrency market are essential at the moment.

“As more investors have been putting their money in the cryptocurrency market recently, it is time for the government to consider coming up with measures to protect investors from risk,” said lawmaker Kim.

Kim Hyoung-joong, a cybersecurity professor at Korea University and also head of the Cryptocurrency Research Center, agrees with lawmaker Kim.

“As so many altcoins have been experiencing surges in prices, many investors have been putting their money into them,” said professor Kim. “The government must take a move to protect retail investors by introducing new regulations such as requiring exchanges to reveal more information about cryptocurrencies to the public."