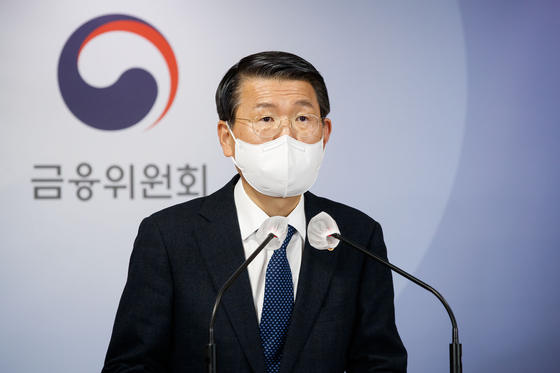 Financial Services Commission Chairman Eun Sung-soo announces the financial authority's decision to partially lift ban on short selling from May at the government complex in Seoul in February. [YONHAP]

With short selling permitted again in two weeks, brokerages are busy sorting out which stocks might be targeted.

The country's financial authorities announced that short selling will resume for Kospi 200 and Kosdaq 150 stocks from May 3.

A retail investor will be able to sell short a maximum of 30 million won ($27,000) worth of stocks when the practice resumes next month. The limit increases as the investor gains experience.

Short selling has long been considered an investment strategy for the benefit of institutional and foreign investors. Retail investors pushed the country's financial regulators to level the playing field for them.

As some short selling has become more accessible to retail investors they are now eyeing what stocks to short sell.

Brokerages say overvalued stocks are most likely to be targets of short selling by investors.

KB Securities generated a list of the most shorted stock before the practice ended in March 2020.

Among the selected stocks, the brokerage further took into account each company's price to earnings ratio, which is share price relative to the earnings per share of a company, and price to book ratio, which compares a company's market value to its book value.

"We thought companies are more likely to become targets of short selling, if investors are already used to shorting them and their share prices and valuation are already higher than their peers," said Kim Min-kyu, an analyst from KB Securities.

The brokerage also picked out some of stocks frequently shorted by hedge funds employing the “pairs strategy,” in which one stock is bought long and a similar stock is sold short.

KB Securities said Amorepacific, KG Inicis, Meritz Securities and Seegene are those likely to be shorted under the pairs trading strategy.

Some analysts say companies that issued a lot of convertible bonds could also become major targets of short selling. Convertible bonds are basically corporate bonds that can be converted into common stocks in the issuing company.