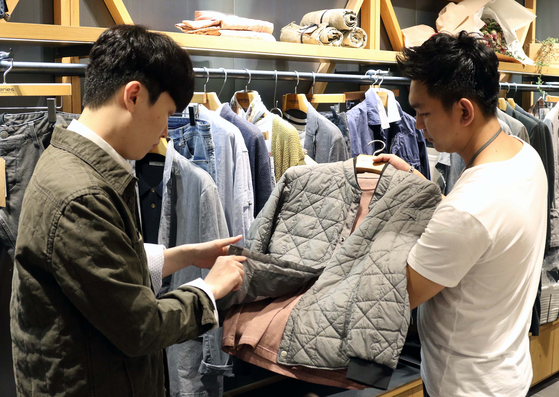 
Men are spending more on luxury goods these days as they get married later and value work-life balance more.

From January through April, sales of men’s luxury products jumped 68.2 percent on year at Shinsegae Department Store. Last month, the sales surged 106.1 percent and 102.2 percent this month through April 16.

A similar trend was observed at other retailers.

“In total, sales to women are, of course, higher than those generated by men,” said Kim Young-seop, merchandise division executive vice president. “But the number of male customers are increasing every year. Sales of luxury and contemporary brands are leading the growth as more men style themselves.”

At Lotte Department Store, men in their 20s and 30s accounted for 43.2 percent of sales to men from January through March.

“These days, men in their 20s and 30s have a strong tendency to style themselves,” said a spokesperson for Lotte Department Store. The well-received luxury products “are not limited to shoes or neckties but are more diverse, to sneakers, bracelets and rings.”

Bags are popular in women’s luxury, while sneakers are well-received by men.

The growing importance of work-life balance and delayed marriage are primary reasons behind men’s increasing purchases of luxury items.

“They don’t hurriedly get married, so they more actively invest on themselves.” said Lee Eun-hee, a professor who teaches consumer studies at Inha University.

Kim from Shinsegae Department Store said, “Men in their 20s and 30s are more prone to purchase casual luxury clothes instead of suits. As spare time grows, they style themselves using convenient clothes and accessories that stand out. This is in contrast to men in their 40s and 50s, who mostly purchased suits, formal shoes and business bags.”

In response to the trend, department stores are strengthening the luxury options for men.

Shinsegae Department Store is opening a Burberry store at its branch in Myeong-dong in central Seoul in June. It’s offering the Netherlands suit brand Suitsupply in a Busan branch next month.