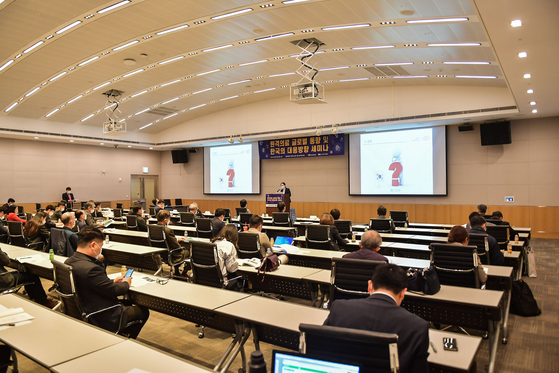 The Federation of Korean Industries hosts a seminar on telemedicine in Yeouido, western Seoul, on Tuesday. [FEDERATION OF KOREAN INDUSTRIES]

After a brief push triggered by the Covid-19 pandemic, policy discussions on telemedicine have once again ground to a halt in Korea, one of the few advanced countries where the practice is still illegal.

Discussions about deregulating telemedicine started in Korea two decades ago, but no telemedicine project has ever gone beyond the pilot stage. The only exception has been during the coronavirus outbreak last year, when the government temporarily allowed doctors to treat patients via the phone during the pandemic.

During a cabinet meeting in April 2020, President Moon Jae-in also addressed the need to develop “no-contact” medical services and the attention led to lawmakers submitting bills to be discussed at the National Assembly.

But according to the Federation of Korean Industries (KFI), a business lobbying group, no progress has been made beyond that point.

“There were bills submitted to the 20th National Assembly but they expired after the session [without being voted on],” said KFI Chairman Kwon Tae-shin in a Tuesday seminar on Korea’s telemedicine industry. “Under the current 21st National Assembly, no reform bills have been submitted.

There are Korean companies that have been acknowledged for their technology, signing contracts to provide services to foreign governments. It’s a pity to see them leave the country as they can’t find opportunities here.”

“The temporary regulation ease proved the safety and efficacy of telemedicine,” he said. “And as the global trend is evident, there’s no reason to delay allowing telemedicine practices in Korea.”

According to a 2020 report from the Organisation for Economic Cooperation and Development, 26 of its 36 member countries have adopted telemedicine. According to Fortune, the global telemedicine industry is expected to reach $185.7 billion by 2026, from $34.3 billion in 2018.

“The growth of telemedicine in China, Singapore and Australia was led by private companies that operate online platforms and after the spread of Covid-19, they received a boost in government support,” said Kim Ah-reum, who heads Inha University Hospital’s International Healthcare Center.

“In all three countries, the coronavirus motivated growth of the telemedicine industry. Korea, on the other hand, took a much more conservative stance.”

Ban Ho-young, founder of Neofect, said there’s still time for Korean companies to lead in the telemedicine market. The company manufactures
medical equipment for patients to rehabilitate at home and exports to more than 40 countries.

“The U.S. rehabilitation market, for example, still has a high dependence on manual labor and is not technically mature compared to its massive size, so there’s still opportunity for Korean firms to penetrate,” he said.

“The government needs to ease regulations on medical practices and medical data to help local ventures grow and thrive in the global market.”