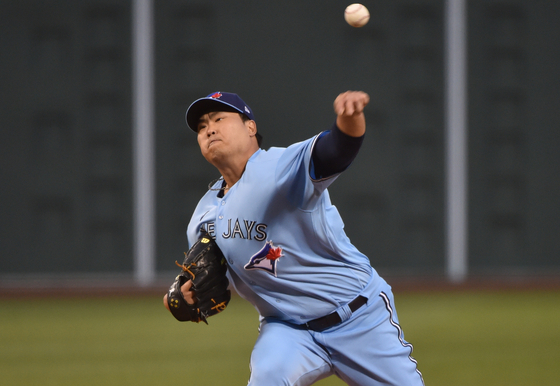 
Toronto Blue Jays ace Ryu Hyun-jin picked up his second loss of the season on Tuesday, going down 4-2 to the Boston Red Sox at Fenway Park in Boston.

Ryu gave up four runs in eight hits over five full innings pitched, striking out two with no walks. After playing four games, Ryu has one win, two losses and a no decision with a 3.00 ERA.

Unfortunately for Ryu, Tuesday's game came down to just one bad inning.

The Blue Jays ace started strong, retiring three batters without any issues at the bottom of the first inning.

A Xander Bogaerts double at the start of the second gave the Red Sox their first hit of the game, but Ryu quickly shut down the next three batters with two flyouts and a pop out to leave the runner stranded and end the inning.

Ryu's run continued in the third inning, when Bobby Dalbec picked up a single to start the inning that was immediately canceled out when Kevin Plawecki grounded into a double play. Another ground out ended the inning.

The Blue Jays were finally able to wake up their bats at the top of the fourth, with a Bo Bichette homer getting the Canadian club on the board. Unfortunately for Ryu, the Red Sox were quick to respond.

Ryu gave up back-to-back singles at the start of the inning, giving the Red Sox two runners on base when Bogaerts sent a home run over the center field wall to put the Red Sox up 3-1. Ryu rallied, striking out the next batter before giving up a double to Marlin Gonzalez.

After a brief mound visit, Ryu picked up another strikeout, but a Dalbec triple brought Gonzalez home to give the Red Sox a 4-1 lead. A quick ground out ended the inning, but the damage was already done for the Blue Jays.

Ryu returned to the mound for one more inning, giving up one more hit — a line drive double — but no more runs. He retired at the top of the sixth and was replaced on the bump by Joel Payamps.

The Blue Jays added one more run with a solo homer from Randal Grichuk at the top of the seventh, but weren't able to overcome the deficit and the game ended 4-2.

Despite having recorded two losses and just one win so far this season, Ryu got off to a fairly strong start. He's given up 23 hits in 24 innings with eight earned runs.

The Blue Jays are currently ranked fourth in the American League East with seven wins and 10 losses. The Red Sox lead the division with 12 wins and six losses.