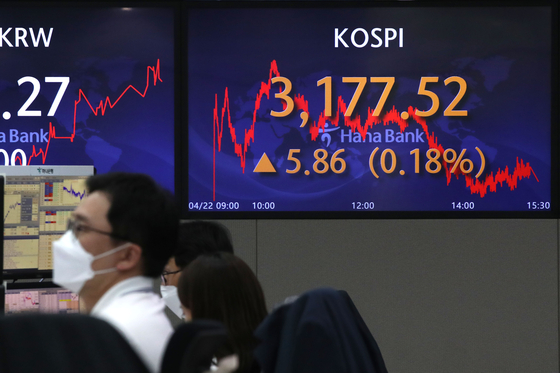 A screen in Hana Bank's trading room in central Seoul shows the Kospi closing at 3,177.52 points on Thursday, up 5.86 points, or 0.18 percent from the previous trading day. [NEWS1]


Stocks rebounded Thursday as investors sought oversold stocks after the benchmark index took a breather the previous session. The won rose against the dollar.


Stocks got off to a strong start after the Kospi slumped 1.52 percent the previous session under increased valuation pressure.

Investor sentiment remained strong, backed by rosy speculations about solid first-quarter earnings and progress in the local vaccine rollout against the new coronavirus.

But the Kospi trimmed part of its earlier gains in the afternoon, largely due to uncertainties related to the lifting of the short selling ban.

"Undoing the short selling ban early next month seems to have directed investor attention away from large caps to small- and medium-cap stocks," he said.

The Financial Services Commission (FSC) banned short selling of stocks from March 16 for a six-month period, in a move to ease a market rout caused by the COVID-19 pandemic.

The temporary ban was extended twice, and short selling is set to resume on May 3.

Internet portal operator Naver closed unchanged from the previous session at 380,500 won, with its rival Kakao shedding 0.42 percent to 117,500 won.

The local currency closed at 1,117.3 won to the dollar, down 1.3 won from the previous session's close.

Bond prices, which move inversely to yields, closed higher. The yield on three-year Treasurys lost 0.5 basis point to 1.105 percent, and the return on the benchmark ten-year government bond fell 0.1 basis point to 1.55 percent.