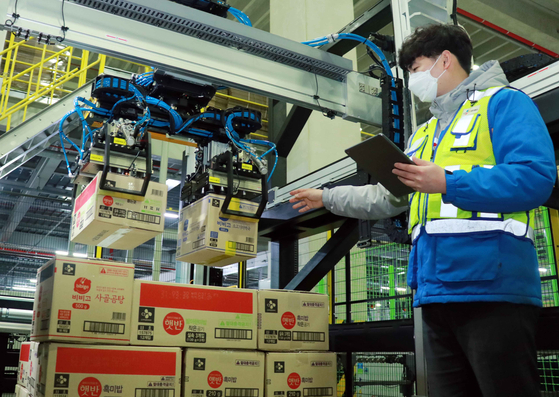 
CJ Logistics is using robots to unload parcels at one of its warehouses.

The country’s largest logistics firm on Thursday said that it is starting to use robot depalletizers at its fulfilment center in Dongtan, Gyeonggi, where products ordered via the internet and apps are stored, managed, packaged and delivered.

A depalletizer is robot that unloads packages or products from a pallet. These machines are quickly being adopted throughout the world as e-commerce become increasingly competitive.

CJ claims to be the first logistics company in Korea to have adopted the technology.

The robot recognizes the size, height and location of a box loaded on a pallet using a camera, picks it up and places it up on the conveyor belt. It uses deep learning technologies and three-dimensional image sensing to be able to pick up boxes that haven’t been properly aligned, according to the company.

Before, a robot arm could only pick up boxes of the one size, and they had to be properly aligned. So it was only used at distribution centers that only handle a single type of product.

The updated robot is able to pick up a box that weighs up to 20 kilograms. It can move 700 boxes an hour on average.

It has become possible for the company “to provide a sophisticated fulfilment center by more efficiently managing various types of products,” the CJ Logistics said in a statement on Thursday.