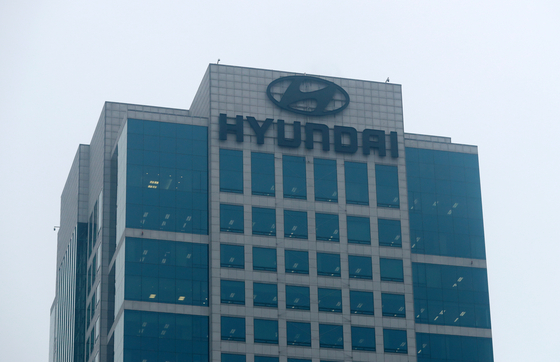 The Korean carmaker sold 1.02 million units globally in the January-to-March period, up 10.7 percent on year. In Korea, sales jumped by 16.6 percent and in the North American market, sales rose by 3.6 percent.

Global semiconductor shortages are expected to take a toll on the carmaker's sales in the second quarter.

"We minimized the impact of the semiconductor shortage in the first quarter through inventory control, but as the shortage continues, some of our manufacturing plants had to shut down in April, and this is likely to continue until May," said Seo Gang-hyun, executive vice president of finance and accounting. "But it is still early to revise our yearly manufacturing plan."

The carmaker also revealed plans to sell electric vehicles (EV) equipped with their own solid state battery by 2030. This is the first time the carmaker specified a timeline for the plan.

It said it is working on both manufacturing its own lithium-ion battery and a solid state battery with a focus on the cell quality and monitoring systems for safety. The company has been buying batteries from LG Energy Solution and SK Innovation.

"We are researching and developing lithium-ion and solid-state batteries with an objective of internalizing the battery manufacturing technology," said Koo Za-yong, head of Hyundai Motor's investor relations, during a conference call.

Koo said the company plans to test manufacture its own solid-state batteries in 2025.

Solid-state batteries are considered safer and more energy-efficient than lithium-ion batteries, as they don't use liquid electrolytes, which are highly vulnerable to external shocks and volatile. No battery or auto maker has yet developed a solid-state battery ready for mass production.
Hyundai Motor said it plans to sell 160,000 EVs this year and 560,000 units annually by 2025.


Hyundai Motor's Ioniq 5, which went on sale in April, Kia's new EV6, the Genesis “JW” and two electric versions of existing models, one of which is the G80 sedan, are expected to boost the carmaker's EV sales this year.

Kia reported 1.94 trillion won in net profit in the first quarter, a 289.2 percent jump from the year before.