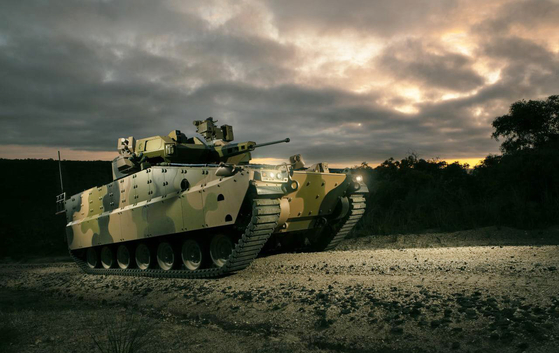 Hanwha Defense's Redback is one of two finalists in the Australian Army's infantry fighting vehicle competition. The company on April 16 submitted an entry to design a optionally manned fighting vehicle replacement for the U.S. Army's M-2 Bradley. [YONHAP]


Hanwha Defense has joined the competition to supply new armored personnel carriers for the U.S. Army.

On April 16, the Korean company submitted an application to join the digital design phase for a replacement for the Reagan-era M-2 Bradley Fighting Vehicle, the company confirmed on Thursday. It is to be replaced with a so-called optionally manned fighting vehicle (OMFV).

It is partnering with leading U.S. defense company Oshkosh, which has extensive experience with military trucks but has not yet built a tracked fighting vehicle.

“Bringing together the heritage of two innovative, reliable and successful land systems companies, gives me great confidence that Hanwha and Oshkosh, with our other consortium partners, will deliver the next generation infantry fighting vehicle the American soldier clearly deserves,” said the head of Hanwha Defense’s U.S. operations, retired Lieutenant General Bernard S. Champoux.

The company makes the South Korean army’s latest armored personnel carrier, the K21, which entered service in 2009. Like the planned OMFV for the U.S. Army, the 11-year-old K21 is an infantry fighting vehicle (IFV) designed to carry infantry into battle under armored protection, provide them supporting fire once they dismount to assault on foot, and destroy other mid-weight armored vehicles.

Hanwha is already offering an advanced version of the K21, the Redback –– which it calls “the world’s most advanced Infantry Fighting Vehicle” –– for the Australian Army’s LAND 400 Phase 3 IFV program.

“Just as the Redback is far more advanced than the K-21 currently used by the Korean Army," a source at Hanwha who spoke on the condition of anonymity said, "Hanwha’s proposed OMFV for the U.S. Army will represent a far greater advancement on the Redback in that it can be operated manned or unmanned.”

The source noted that the company’s reputation had received a boost from being selected as one of the two finalists in the Australian competition.

The U.S. Army’s OMFV program was originally announced in June 2018 as a next generation combat vehicle (NGCV) program to replace the M-2 Bradley in response to concerns from members of the U.S. Congress.

Updated numerous times since its introduction in 1981, the M-2 has been assessed by the U.S. Army as having reached the technological limits of its capacity to accommodate new electronics, armor, and defense systems.

Two past efforts to replace the M-2 — the Future Combat System Program and the Ground Combat Vehicle Program — were cancelled in 2009 and 2014 for reasons related to cost and not meeting what successive U.S. Defense Secretaries viewed as the armor, weight and capacity requirements for future warfare.

In October 2018, the U.S. Army re-designated the NGCV as the OMFV. However, the Army’s first request for proposals for designs of the OMFV was scrapped in 2020, after the industry said the Army’s wish list of requirements for the vehicle and the timeline were not feasible.

The Army reopened the OMFV competition in February 2020 by releasing a new market survey with a minimally prescriptive wish list and an acquisition strategy that shifted most of the initial cost burden to the Army. Last April, the Army provided new guidance to potential bidders, which featured a five-phased approach to acquisition as well as a pledge to “reduce foreign barriers to competition.”

The five OMFV bids including Hanwha’s will be narrowed to three by 2023, with one company to be selected in 2025 to proceed to production.

Delivery of the OMFV is scheduled for 2030.

Hanwha's cluster munitions business to be spun off