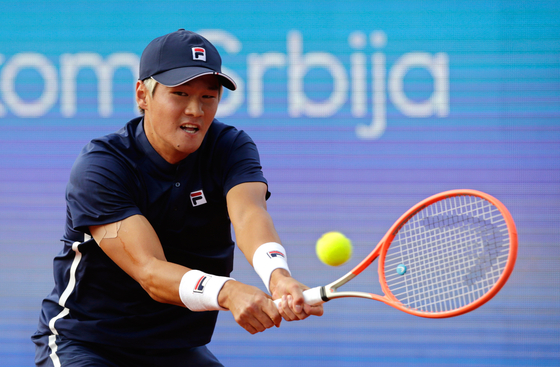 Kwon Soon-woo in action against Novak Djokovic of Serbia during their second round match of the Serbia Open tennis tournament in Belgrade, Serbia, Wednesday. [EPA]


Korean tennis player Kwon Soon-woo had his first showdown with world No. 1 Novak Djokovic in the Round of 16 at the Serbia Open in Belgrade, Serbia on Wednesday.

Kwon lost in straight sets, 6-1, 6-3, and Djokovic continued to the next stage of the tournament.


To earn a spot against the top seed, Kwon had to battle past Roberto Carballes Baena of Spain in straight sets on Tuesday.

Unlike Kwon, this was Djokovic's first game of the Serbia Open because the top four of the eight seeds advanced to the second round with a bye in the first round.

Djokovic is considered one of the greatest men's tennis players of all time.

In February, he won his ninth Grand Slam at the Australian Open, winning a total of 18 Grand Slam men’s titles — only two wins behind No. 7 Roger Federer and Rafael Nadal.

Djokovic has also held the world No. 1 spot for the longest time in tennis history, topping the world rankings for 317 weeks, surpassing Federer's previous record of 310 weeks.

Kwon fought back, winning his serve game after exchanging deuces with the top seed. However, the veteran Serbian had an answer for almost everything up Kwon's sleeve. Failing to score another game, Kwon quickly conceded the first set to Djokovic 6-1.

Kwon found himself back in a difficult position in the second set, losing 5-1. However, the 23-year-old was not ready to go home just yet. Defending his serve again, Kwon also managed to break Djokovic’s serve to take the set score to 5-3.

Though Kwon had a chance to turn things around at match point, a fatal double-fault on his serve ended the match. The game lasted 68 minutes.

Djokovic will play his second game against countryman Miomir Kecmanovic in the quarterfinals on Friday, tentative to change.