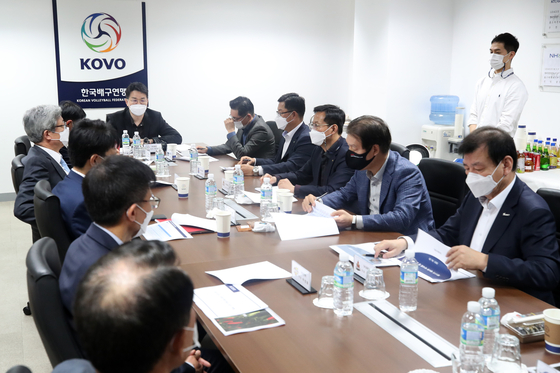 The Korea Volleyball Federation (KOVO) holds a board meeting on Tuesday to discuss the creation of a seventh women's volleyball team run by Pepper Savings Bank at the KOVO office in Mapo District, western Seoul. [News1]

It has been 10 years since a new club joined the V league, after the Industrial Bank of Korea founded the Hwaseong IBK Altos in 2011.

The key issue for the newly founded club is acquiring athletes.

Pepper Savings Bank will first pick six players in the rookie draft. The team can then buy one athlete from each of the six existing teams, but cannot bid for the nine players that each club has earmarked as not up for sale. They are also allowed to recruit one foreign player.

In addition, KOVO permitted the new team to immediately enter the free agent market and acquire players that have voluntarily retired.

Kim, who has played the majority of her career overseas, is unlikely to return to the V League next season. If she does, the Incheon Heungkuk Pink Spiders still hold her contract as she has not played enough seasons here to earn free agency. That means the only way Pepper Savings Bank could acquire Kim would be through a direct trade with the Pink Spiders.

“We heard that the Pepper Savings Bank are trying to scout Kim," said Pink Spiders General Manager Kim Yeo-il. "The club does not have any intentions whatsoever of transferring Kim.

“Though we congratulate the new team on its foundation and will do our best to cooperate in assisting them in ways possible, we regret their choice to step out of line and approach our players through the media.”

Kim’s decision on her whereabouts next season is unknown at this point.


“I plan to take my time and think before I decide where to play next season” said Kim during the V league MVP award ceremony.

One other thing that remains for the new team to decide is where it will be based. Two possible candidates are Gwangju and Seongnam, Gyeonggi.

Gwangju is a much larger city and therefore home to a much larger potential fan base, while Seongnam is the where the head office of Pepper Savings Bank is located. The unnamed team will decide where to call home before April 27.

It is unclear whether they will have a full roster in time for the upcoming KOVO Cup later this summer, but the team is expected to join the 2021-22 V league season starting Oct. 16.