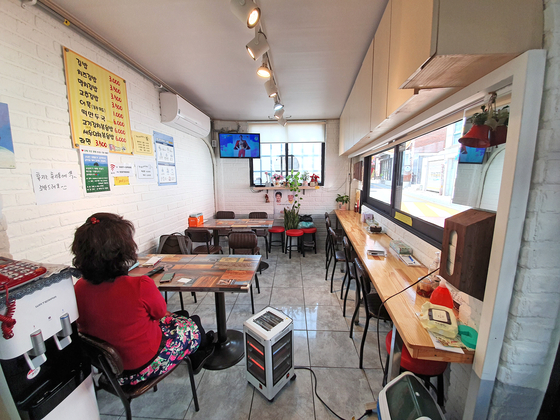 
Mrs. Kim, who runs a cafe with her husband in North Jeolla, is getting up to 40 calls every day from debt collectors.

Kim, 39, opened the cafe in December 2019, just months before the coronavirus outbreak. Her monthly sales are about 1.4 million won ($1,250) these days, but she has to pay about 4 million won to 5 million won for rent and electricity.

She had no choice but go into debt. She borrowed from friends, acquaintances, banks and even private money lenders over the past year, and the total borrowings amounted about 100 million won so far.

“I hate waking up in the morning these days because I know I will receive so many phone calls from debt collectors,” she said. “They said they would put my car up at auction, and I don’t have any idea how to stop them.

“Of course, I considered closing down the business so many times, but the closure also costs money, which is at least 5 million won to 6 million won,” she added. “And if I give this business up, what can I do to make a living?”

The coronavirus pandemic has forced the self-employed deeper into debt.

According to a report by the Bank of Korea, total borrowings by the self-employed stood at 803.5 trillion won as of end of last year, up 118.6 trillion won from the previous year.

The cafe owner said she applied for the government’s fourth round of emergency relief funds for the self-employed, but was notified that she was not qualified for aid because the sales of her cafe last year was larger than in 2019.

“There’s nothing we can do at the moment, but just sit down at the cafe for some 13 hours every day,” she said. “I can’t fall asleep these days unless I have a bottle of soju.”

There are a total of 5.42 million self-employed businesses in Korea. Nearly half of them, some 2.38 million, are in debt and have an average of 337.6 million won of debt.

In a poll on 1,545 self-employed, nine out of 10 said their sales have halved since the pandemic started. They said their debt increased by 51.32 million won in 2020, and the number of part-time workers fell to 2.1 from 4.

Nearly half of the respondents said, they are "seriously considering shutting down the businesses."

A 48-year-old man, who runs a 30-pyeong (1,068-square-foot) bakery in Dongdaemun District, central Seoul, recently got a part-time job.

“The monthly rent of my bakery is about 3.3 million won, and I’ve been failing to pay that for a year,” he said. “I started this part-time job to save some money to pay the electricity bills.”

“But these days, I’m confused about who I am. Am I a part-time delivery worker or a bakery owner?”

Small business owners argue that the government should ease the regulations on loans and offer the self-employed more chances to borrow money from banks.
“The country has so many conditions on lending money to small business owners,” said the bakery owner. “I hope the government could temporarily ease the regulations on loans at least until the end of Covid-19 pandemic.”

“Of course, huge debt of the self-employed is a serious problem, but the most important issue here is that how quickly the debt has been growing,” said Kim Sang-bong, an economics professor at Hansung University. “Many self-employed are heavy debtors who have been borrowing money from at least three different financial firms.”

“One-time support such as emergency relief grants cannot be a good idea. The government must map out some plans that can help the self-employed in the long term such as support for closure of business and education that helps them to get a stable job.”