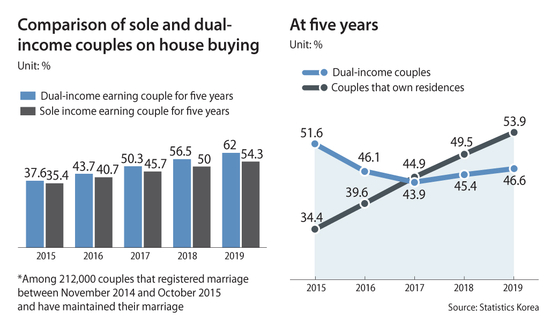 Four out of 10 newlywed couples in Korea got through the first five years of marriage without buying a residence, data from Statistics Korea showed Sunday.

That's a change from the good old days, when newlyweds were expected to buy property fairly soon -- with plenty of help from parents.

The statistics agency conducted research on 212,000 newlywed couples who registered their marriages between November 2014 and October 2015 and have remained married.

Some 40.7 percent of the couples did not buy homes. Some couples bought residences but later lost possession.

The study suggested that couples that owned their own homes had more chances of having a child by their fifth year of marriage, but only by a little bit.

Newlyweds had more chances of owning a house if they were dual-income couples.

Dual-income households, however, had a slightly less chance of having children.

Some 51.6 percent of couples were from two-income families in the first year of marriage. That percentage dropped to 43.9 percent by the third year, probably because a wife or husband left a job to take care of a child.

The study said that 23 percent of the couples gave birth to a firstborn in the first year of marriage and 32.9 percent in the second year.