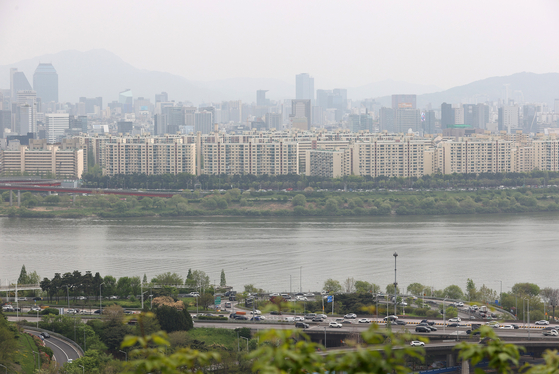 Views of apartment in Gangnam from the Han River on April 22. Apartment prices in Seoul on average are 1.1 billion won, which is the first. [YONHAP]

The bank’s study is based on mid-month numbers.

Prices under the Moon Jae-in administration have rising dramatically despite 25 measures to keep a lid on housing costs.

When the Moon administration started in May 2017, the average apartment price in Seoul was 607 million won. In just four years, the average price has increased 83 percent, which is 504 million won more.

Prices this month are up 0.74 percent from March.

Average apartment prices in Gangnam were still higher than those of apartments north of the Han River. While the average in Gangbuk was 878.3 million won, in Gangnam, it was 1.3 billion won.

But Gangbuk apartment prices were rising at a faster rate than those in Gangnam.

The three areas with the fastest increases are all in Gangbuk, Gangbuk District apartments rising 1.97 percent, Dobong District 1.76 percent and Nowon District 1.44 percent.

The report noted that apartment prices in areas that may be redeveloped are particularly strong. Seoul mayor Oh Se-hoon, who won in a landslide earlier this month, promised during his campaign fast redevelopment if elected.

Demand for redevelopment of outdated neighborhoods has been strong as the newly added space could ease shortages.

Outside of Seoul, demand has also been strong.

Along with sales prices, jeonse long-term lease prices are also up.

The average jeonse price in Seoul in April was 610 million won, up 4.22 million on month. Jeonse prices for the first time exceeded 600 million won in March.

The average jeonse price in Gangnam was 710 million won while in Gangbuk it was 496.3 million won.