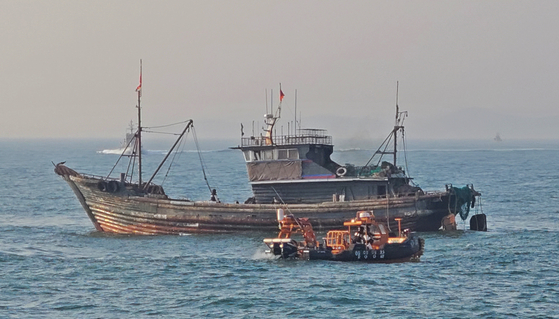 
The number of Chinese fishing boats illegally fishing in waters near the Northern Limit Line (NLL) in the Yellow Sea shot up to an average of 240 vessels per day this month, representing a threefold increase from the same period last year, according to government estimates.

The surge in Chinese fishing trawlers, which often linger in North Korean waters north of the NLL before descending into South Korean maritime territory under the cover of night, poses a thorny dilemma for the Korean government, which has reportedly struggled to obtain active cooperation from Chinese authorities on the issue.

The average daily number of Chinese fishing boats operating near the NLL in April declined from 2015 to 2018 and stayed low until jumping back up this year.

While March to June is the peak fishing season for swimming crabs –– considered a delicacy in both Korea and China –– the government believes that additional factors have driven more than the usual number of Chinese trawlers to the waters near the Korean Peninsula this year.

Following a spate of Covid-19 contamination on packaging of imported cold chain food products beginning in July, China has restricted food imports and heightened inspections on products coming from abroad, leading to shortages in its domestic market.

Chinese and North Korean coast guard patrols of the Yellow Sea have also diminished, likely due to coronavirus-related precautions.

Targeting the North’s main export categories, the United Nations Security Council tightened economic sanctions on the North in response to its missile tests in July 2017 by banning purchases of its seafood, coal, iron and lead.

However, according to a report by a panel of experts assisting the UN Security Council’s Sanctions Committee on North Korea, Chinese ship operators are likely aiding the North in violation of the sanctions enforcement by purchasing fishing rights in North Korean waters.

The sanctions explicitly prohibit the purchase of fishing rights from Pyongyang.

The panel reported cases in which Chinese fishing vessels changed their names or carried North or even South Korean flags or fake fishing licenses, to conceal the fact that they were violating the sanctions.

In June 2016, a Chinese fishing ship near Socheong Island rammed into a South Korean coast guard patrol boat, sinking it and then fleeing. In 2019, crew members aboard a Chinese fishing vessel caught inside the South’s exclusive economic zone resisted detainment by throwing axes at the Coast Guard before also fleeing.

According to the South Korean government, the illegal activities of Chinese ships have led to smaller hauls in South Korean waters because so many are caught near North Korea before the creatures can migrate south.

The Ministry of Oceans and Fisheries submitted a formal protest to the Chinese Ministry of Agriculture and Rural Affairs and Coast Guard on April 1. A maritime affairs representative at the Korean Embassy in Beijing also reportedly held talks with counterparts in China on April 16 on the issue.

Despite South Korean complaints to Chinese authorities through diplomatic channels, China has reportedly been noncommittal about cracking down on illegal fishing fleets from its own end, claiming that complete enforcement is impossible and that such ships cannot be controlled.