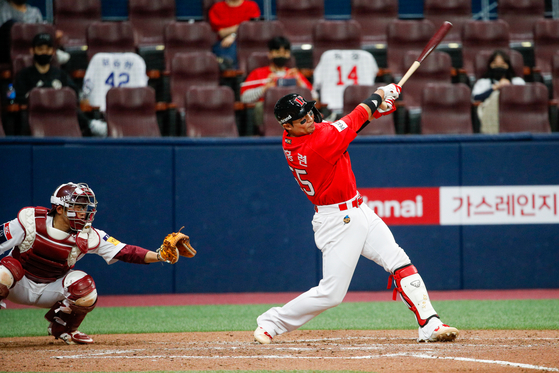 SSG Landers catcher Lee Heung-ryun hits the ball at the top of the sixth inning against the Kiwoom Heroes at Gocheok Sky Dome in western Seoul on Sunday. [NEWS1]


The LG Twins and the SSG Landers are tied for first in the KBO after just over three weeks of play, with only the 10th-place Kiwoom Heroes seeming to really struggle so far this season.

It was a sweep-less weekend for the league, with perhaps the biggest surprise coming from the Doosan Bears, who beat the NC Dinos with two games to one at Jamsil in southern Seoul.

The Bears got off to a surprisingly strong start considering the recent injury to catcher Park Sei-hyok, beating the then-first place Dinos 5-1 on Friday and 9-6 on Saturday. The Changwon club avoided a sweep on Sunday, taking a strong 10-0 win to round off the series.

The two losses pull the Dinos down to fourth, alongside the Bears and the KT Wiz.

The Wiz also had a tough weekend, losing their weekend series at home to the Lotte Giants. Again, the seventh-place Giants dominated early, winning the first two games — 10-5, 4-2 — before the Wiz came back to take the final game 6-5.

Every other series ended with the higher-ranked team winning with two games to one.

The LG Twins took on the Hanwha Eagles in Daejeon, winning the series but suffering a humiliating loss on Saturday that saw the ninth-place Eagles score 19 runs for a 19-5 victory.

The Landers faced the Kiwoom Heroes at Gocheok Sky Dome in western Seoul, winning the first two games before the Heroes were able to take a narrow victory 4-3 on Sunday. The Heroes are now 4.5 points behind the first-place Landers and Twins, and are the only team that seems to be really struggling to throw anything together offensively.

The third-place Samsung Lions took on the Kia Tigers in Daegu, losing the first game 4-1 before coming back to win the series with 8-4 on Saturday and 3-2 on Sunday. The Lions continue to tie the leaders in terms of wins, trailing only due to an extra loss with an extra game played.

This week, the Twins will take on the Giants at Jamsil while the Wiz head to Incheon to face the Landers. The Dinos and Lions will face off in Daegu and the Eagles will head to Gwangju to play the Tigers. The Bears will take on the Heroes at Gocheok Sky Dome.