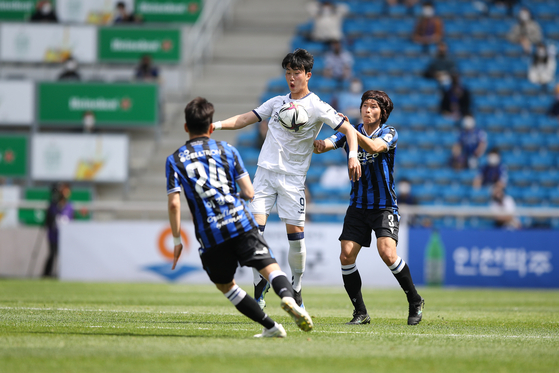 Kim Ji-hyun of Ulsan Hyundai Motors, center, traps the ball in a game against Incheon United at Incheon Football Stadium in Incheon on Sunday. [KLEAGUE]


It was a quiet week for the K League 1, with only Daegu FC and the Suwon Samsung Bluewings picking up wins while the four other games all ended in draws.

Daegu FC beat Gwangju FC 1-0 at Gwangju Football Stadium on Saturday, with Brazilian striker Edgar Silva scoring the only goal. This is Daegu’s third 1-0 win, enabling the team to jump up to the upper half of the K league 1 table, sitting at sixth while Gwangju is at eighth.

The Bluewings' left back Lee Ki-je found the back of the net in the last eight minutes of the game for the win. The Bluewings are at fourth and Seongnam at seventh in the league.

Ulsan Hyundai Motors got one point with a 0-0 against Incheon United at Incheon Football Stadium on Sunday, a disappointing game for Ulsan as they continue their quest to beat Jeonbuk Hyundai Motors to the top of the table this season. Ulsan is currently six points behind Jeonbuk, and haven't picked up a win or scored a single goal in the last three games.

“We could not get hold of the chances we got at this game," said Ulsan manager Hong Myung-bo. "The first half of the game was not good; the second half was better but we weren’t really able to seize the goal opportunities then either."

Jeonbuk got to keep their top spot on the table for another week, drawing 1-1 with Gangwon FC on Saturday at Chuncheon Songam Leports Town in Chuncheon, Gangwon. Despite Gangwon forward Ko Moo-yeol having opened the scoring for the game, Gangwon conceded an equalizer to Jeonbuk midfielder Takahiro Kunimoto in the last 10 minutes.

FC Seoul and Suwon FC also found themselves with a 1-1 draw at Suwon Sports Complex in Suwon, Gyeonggi, on Sunday.

Neither team was able to break through until the 78th minute, when Suwon striker Lars Veldwijk headed a goal in. Just as it seemed Suwon was taking away the game, Suwon goalkeeper Park Bae-jong committed a foul in the box to give Seoul a penalty.

Seoul midfielder Aleksandar Palocevic scored the equalizer from the penalty spot, putting an end to their four consecutive losses. FC Seoul is now at eighth and Suwon FC at twelfth on the table.

Jeju United tied with the Pohang Steelers at Pohang Steel Yard in Pohang, North Gyeongsang on Saturday. Jeju is at third and Pohang at fifth on the table.

The K league 1 continues this week as FC Seoul take on Seongnam FC on Friday; Suwon FC face Daegu, the Bluewings face Pohang and Ulsan face Gwangju on Saturday; and Jeonbuk take on Jeju and Incheon play Gangwon on Sunday.