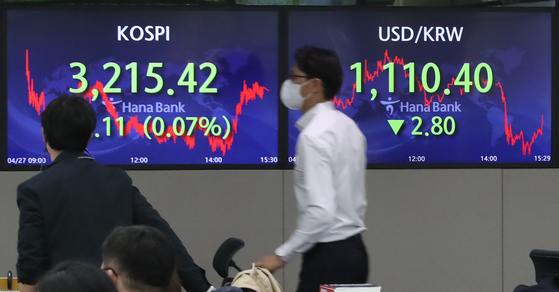 A screen in Hana Bank's trading room in central Seoul shows the Kospi closing at 3,215.42 points on Tuesday, down 2.11 points, or 0.07 percent from the previous trading day. [YONHAP]


Stocks edged down Tuesday amid increased valuation pressure, with investors taking to the sidelines ahead of a meeting of the U.S. Federal Open Market Committee (FOMC). The won rose against the dollar.

Stocks got off to a lackluster start on increased valuation pressure, as investors wondered whether to sell stocks for profit after the Kospi’s three days of gains. Foreign and institutional selling led the Kospi's retreat.

Concerns about early post-pandemic inflation remained low, with the FOMC widely expected to hold on to its dovish stance to support the economic recovery from the pandemic.

General optimism about economic recovery from the pandemic pegged the Kospi's further loss.

Earlier in the day, the Korean central bank said the country's gross domestic product expanded 1.6 percent on-year in the first quarter this year, up from a 1.2 percent expansion in the final quarter of last year.

The local currency closed at 1,110.4 won against the dollar, down 2.8 won from the previous session's close.

Bond prices, which move inversely to yields, closed mixed. The yield on three-year bonds lost 2.3 basis points to 1.097 percent, and the return on the benchmark ten-year government bond added 1.0 basis points to 1.57 percent.