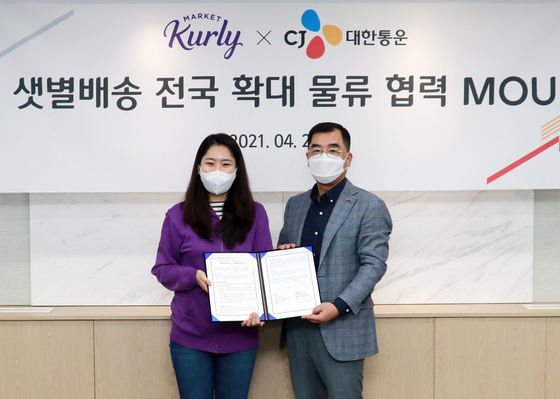 
Market Kurly is expanding next morning delivery to areas outside of greater Seoul next month as e-commerce operators in Korea battle intensely on speed and price for market share.

The company is working with CJ Logistics to provide next morning delivery services to residents of Daejeon, Sejong, Cheonan, Asan and Chungju starting on May 1. The company plans to expand the service nationwide later this year.

Market Kurly made the announcement on Tuesday - two months after opening a new distribution center in Gimpo, Gyeonggi, in February.

App users can receive groceries before 7 a.m. if they place an order before 11 p.m. the previous night.

Market Kurly will release packaged fresh produce from its distribution center and CJ Logistics refrigerated delivery trucks will deliver the packages to its distribution facility in Chungcheong, where they will be sorted by destination and then delivered to the doors of the customers.

The expansion of dawn delivery is due to the increase in demand from consumers, according to the company in a statement.

Kurly, which plans to go public later this year, is expanding services aggressively.

Earlier this month, the company jumped into the ongoing price war that started when Coupang went public last month – though Market Kurly did not offer a low-price guarantee like its rival Emart.

The company, established in 2014, has never generated a profit.