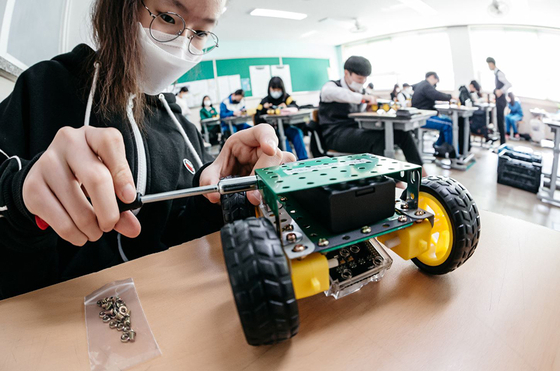 Students build a model electric car during the education program “Science Beyond Imagination” operated by the Posco 1% Foundation. [POSCO]

In line with the rapidly emerging global push for environmental, social and governance (ESG) management, Posco is pursuing its vision to “build a better future together,” said the company.

Marking the fourth year since the initiative began, Posco held the Corporate Citizenship Advisory Council on April 16 to discuss the company’s long-term strategy.

The Posco 1% Foundation is one example of that effort.

Established in 2013, the Posco 1% Foundation has been making various social contributions for the good of future generations, multicultural families and people with disabilities, and further expanded the program support to the artistic community.

The non-profit foundation operates on a matching grant donated by employees — one percent of their monthly income — from Posco and its partners.

One of the programs the Posco 1% Foundation funded is the “Wings of Hope” program.

The Wings of Hope program, launched in 2019, aims to support people with disabilities in Pohang, North Gyeongsang, and Gwangyang, South Jeolla. The foundation provided customized support devices and also offers sports equipment for impaired athletes. The program has so far helped 851 people.

The foundation plans to carry out another program to remodel facilities for people with disabilities in Pohang and Gwangyang.

For the future generation, the Posco 1% Foundation is operating the “1% Art School” with the Korea Mecenat Association.

The 1% Art School is a program providing opportunities for children to experience diverse activities including literature, dance, art and music. A total of 1,072 children and 79 organizations participated in the program last year.

The Posco 1% Foundation also launched the “Science Beyond Imagination” program to spark interest in science among children living in Pohang and Gwangyang, where educational opportunities are limited compared to the greater Seoul area.

Furthermore, Posco will expand the “Do Dream” program, which offers a helping hand to children leaving welfare facilities without support.

“CollaborArtion,” is another project that gained attention. Starting last year, the CollaborArtion project provides a platform for disabled artists to communicate with other artists and the public. Posco announced on April 20 that the second season of the CollaborAtion project is on its way.

In addition, the “Chin Chin Rainbow” project supports children from multicultural families, in a bid to encourage kids from culturally diverse backgrounds to pursue their dreams.

Some 26,000 employees at Posco have also participated in an online donation program “1% My Little Charity” amid the Covid-19 pandemic, donating 840 million won in total.