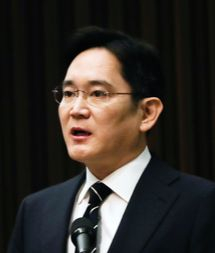 The Korea Enterprises Federation (KEF) said Tuesday that a letter signed by the heads of five business lobbies was submitted to the Blue House on Monday.

In the letter, the business leaders said contact-free economic activities became crucial during the Covid-19 pandemic and digitalization is accelerating in all industries, making the role of semiconductors more important than ever.

“U.S. President Joe Biden is supporting massive investments in the semiconductor industry and other competitors are also following the suit,” they wrote.

Samsung Electronics may fall behind and lose its prestige as the world’s largest semiconductor company because Lee's imprisonment will inevitably delay investment decisions, they wrote.

In the letter, the business leaders said it is imperative for the government and the business community to work together to improve global competitiveness, and the role of a company leader became more important than ever in the process.

While corrupt business practices deserve strong punishment, a company must make investments and create jobs to contribute to the nation’s economy, they said. “In order to allow an opportunity for Lee to devote himself to economic recovery for the sake of the country and the people, we appeal to the president to make a decision of reconciliation,” they wrote.

They urged Moon to free Lee from jail as soon as possible.

Lee is in jail for bribery. In a retrial ordered by the Supreme Court in 2019, the Seoul High Court on Jan. 18, 2021 found Lee guilty of giving bribes worth 8.6 billion won ($7.8 million) to former President Park Geun-hye through her longtime friend Choi Soon-sil for political favors. The court sentenced Lee to two and a half years in prison.

He had already spent a year behind bars, leaving him with 18 more months to serve. He did not appeal the ruling and his trial was formally over as of January. Lee, therefore, is eligible for a presidential pardon.

Both are considered hometowns of Samsung. The late Lee Byung-chull established a trading business in Daegu in 1938. Gumi in North Gyeongsang has been the manufacturing hub for Samsung mobile phones since 1988.

The petitions are the latest demands for Moon to pardon Lee. A presidential aide, however, said Tuesday that there had been no discussion inside the Blue House about a pardon. "As of now, we have no plan to consider it," the source said.

A group of 25 senior leaders of Jogye Order of Korean Buddhism sent a petition to the government on April 12.

On Monday, Sungkyunkwan, the central institution of Confucianism in Korea, also issued a statement asking Moon to pardon Lee.

According to a WinGKorea Consulting poll released on Tuesday, 69.4 percent of respondents nationwide said Lee should be pardoned, while 23.2 percent said he should not. The poll was requested by the Asia Business Daily and conducted on Saturday and Sunday.