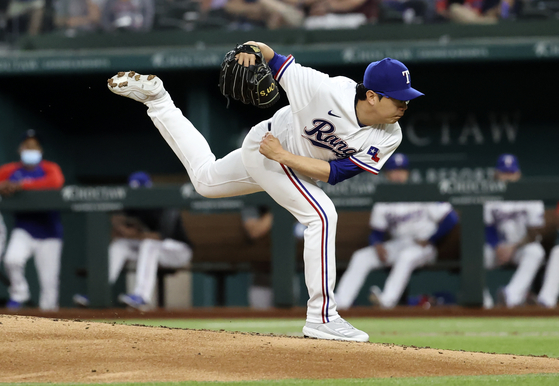 
Yang Hyeon-jong became the 26th Korean-born baseball player to appear in the major leagues on Monday, making his long-awaited debut with the Texas Rangers against the Los Angeles Angels at Globe Life Field in Arlington, Texas.

Starter Jordan Lyles got roughed up in the first few innings, giving up seven runs before being removed in the third inning. Yang took over with two out, immediately getting a pop out to end the inning.

Yang was looking settled in the fourth, taking the Angels down in order with a lineout, a groundout and a flyout. The fifth was more of the same, with Yang again relying on his defense to quickly end the inning with two groundouts and a flyout.

The sixth proved to be more of an issue for the left-hander, with two singles and then a double bringing home a run for the Angels with one out. Yang rallied after the run, responding with his first strikeout in the majors, followed by a groundout to end the inning.

The seventh opened with a solo home run from Jose Iglesias. A single followed, but once again Yang was able to work himself back into the count and start looking comfortable. Despite a mound visit, the Rangers decided to back Yang for the rest of the inning and a quick force out, pop out and flyout ended the inning.

Yang left the mound in the eighth with the Rangers down 9-4. Neither team was able to get anything across in the last two innings and the Angles walked away with a big win on the road.

As well as a solid few innings work that proves what a long-time starter can do in relief, Yang also made a name for himself with a bit of defensive flare in the fourth inning.

Starting off the inning against Angels' right fielder Jared Walsh, Yang showed off his reflexes when Walsh sent his slider flying straight back at the mound. Yang reached over his body with his right hand, plucking the ball out of the air over his left shoulder to record the first out.

"I'm here to face new challenges, Yang said in a postgame interview. "I thought first impressions would be really important to show the team and fans who I am. Although I got five hits throughout four innings, I really enjoyed every moment and I think I can offer better to the team."

After spending the last few weeks on the Rangers' taxi squad, Yang was called up to the 40-man roster shortly before Monday's game.

"A staff member called me this morning and told me to stand by," Yang said. "At 2 p.m. I got a message saying I was in the team."

Yang looked good in his first three spring training appearances for the Rangers as a bullpen pitcher with a 3.00 ERA, giving up just six hits and two runs in six innings pitched. He then gave up four runs in four and one third innings at the end of spring training, apparently enough to push him out of contention for a bullpen spot. He has spent the last month mostly playing at the team's alternate training site.

Yang played 14 years in the KBO with the Kia Tigers, winning the ERA title in both 2015 and 2019. In 2017, he led the Tigers to the Korean Series title, winning both the regular season and championship MVP titles along the way. Yang has a career ERA at 3.83 with 147 wins and 95 losses in the KBO.

As well as being the 26th Korean-born player to appear in the majors, Yang is also the third Korean to play for the Rangers. He follows in the footsteps of legendary pitcher Park Chan-ho, who played for the Rangers from 2002 to 2005, and SSG Landers slugger Choo Shin-soo, who played in Texas from 2014 to 2020.